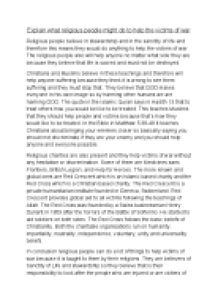 ﻿Explain what religious people might do to help the victims of war Religious people believe in stewardship and in the sanctity of life and therefore this means they would do anything to help the victims of war. The religious people also will help anyone no matter what side they are because they believe that life is sacred and must not be destroyed. Christians and Muslims believe in these teachings and therefore will help anyone suffering because they think it is wrong to see them suffering and they must stop that. ...read more.

In the Bible in Matthew 5:38-48 it teaches Christians about bringing your enemies closer so basically saying you should not discriminate if they are your enemy and you should help anyone and everyone possible. Religious charities are also present and they help victims of war without any hesitation or discrimination. Some of them are Medicines sans Frontiers, British Legion, and Help for Heroes. The more known and global ones are Red Crescent which is an Islamic based charity and the Red Cross which is a Christian based charity. ...read more.

Both the charitable organisations run on humanity, impartiality, neutrality, independence, voluntary, unity and universality beliefs. In conclusion religious people can do a lot of things to help victims of war because it is taught to them by their religions. They are believers of Sanctity of Life and stewardship so they believe that is their responsibility to look after the people who are injured or are victims of war. They can do this by running charities and organisations such as the Red Cross and the Red Crescent to help people without any discrimination. Also, they can stick to their morals and beliefs and aid society in a more passive way. ...read more.