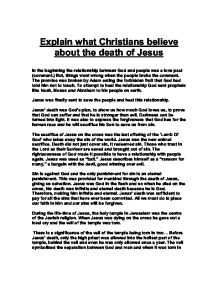 Explaining what Christians believe about the death of Jesus

Explain what Christians believe about the death of Jesus In the beginning the relationship between God and people was a love pact (covenant.) But, things went wrong when the people broke the covenant. The promise was broken by Adam eating the forbidden fruit that God had told him not to touch. To attempt to heal the relationship God sent prophets like Noah, Moses and Abraham to his people on earth. Jesus was finally sent to save the people and heal this relationship. Jesus' death was God's plan, to show us how much God loves us, to prove that God can suffer and that he is stronger than evil. Darkness can be turned into light. It was also to express the forgiveness that God has for the human race and he will sacrifice his Son to save us from sin. The sacrifice of Jesus on the cross was the last offering of the 'Lamb Of God' who takes away the sin of the world. Jesus was the new animal sacrifice. Death did not just cover sin, it redeemed sin. Those who trust in the Lord as their Saviour are saved and brought out of sin. The righteousness of God made it possible to have a relationship with people again. Jesus was used as "bait." Jesus describes himself as a "ransom for many," a bargain with the devil, good winning over evil. Sin is against God and the only punishment for sin is an eternal punishment. This was provided for mankind through the death of Jesus, giving us salvation. Jesus was God in the flesh and so when he died on the cross, his death was infinite and eternal death because he is God. ...read more.

Through Jesus' suffering we know that he had human emotions of fear, anger and pain, just as we do. For example, in the Garden Of Gethsemane he spoke to God, asking him to "Take this cup away from me" meaning that he did not want to be crucified and go through all of the pain. He was afraid, and when he saw that the disciples were asleep, he felt that his friends had let him down. Something we have all experienced at times, he was disappointed and sad because there had been no-one there for him when he needed them the most, "Could you not stay awake one hour with me?" This gives us a closer relationship with God because when we feel sad, let down, in pain, angry or afraid, we know that Jesus knows how we feel because he has been through the same things. Jesus sacrificed his live for us, his death and suffering lead to our freedom. And in our own lives we should make sacrifices for other people. We sacrifice our time, our belongings, our money and sometimes even our lives. Sometimes we have to give up something we want to give others the things they need. There are examples of this all over the world, people who choose to join charities and travel the world, caring for the poor, feeding them, people who are carers to those with special needs, those in the armed services... All of these people give up their time and forget their needs to come to the aid of others. ...read more.

up for what you believe and show people that you are stronger than them and that your God is worth more to you than your life. Although some people believe that you would do more good here on earth, I do not believe it would be right for those people to learn/ teach their religion in such a secretive way, having to pretend everyday. The fact that they have died shows not only the "enemy" but people of their own faith that people have stood up for them, that they have made sacrifices, gone through suffering, not just for God but for all people of that religion. There is a life with God after we die, and I do not believe that we should be afraid to stand up for what we believe in, just because the consequence of doing so means death. The fact that those people were so tragic, and yet so strong gives them remembrance in our hearts, that they made sacrifices for us, to remember what they have been through, the pain they felt. They did it to make a difference, to make a stand and the remembrance of them should make an impact on our lives, especially today. In a country and a society where we do not have to hide our religion, race or culture, where we can carry out religious practises freely and promote what we believe in. We should always remember those who fought for us to be here, living like this. So we can make a difference, live a good, free life being good Christians. So we can die in God's grace and spend eternity with him. ?? ?? ?? ?? ...read more.