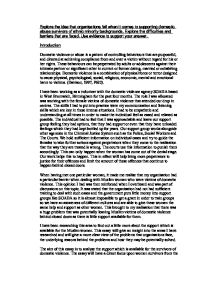 Explore the idea that organisations fail when it comes to supporting domestic abuse survivors of ethnic minority backgrounds. Explore the difficulties and barriers that are faced. Use evidence to support your answer.

Explore the idea that organisations fail when it comes to supporting domestic abuse survivors of ethnic minority backgrounds. Explore the difficulties and barriers that are faced. Use evidence to support your answer. Introduction Domestic violence or abuse is a pattern of controlling behaviours that are purposeful, and directed at achieving compliance from and over a victim without regard for his or her rights. These behaviours can be perpetrated by adults or adolescents against their intimate partner or significant other in current or former dating, married or cohabiting relationships. Domestic violence is a combination of physical force or terror designed to cause physical, psychological, social, religious, economic, mental and emotional harm to victims. (Davison, 1997, P632). I have been working as a volunteer with the domestic violence agency SOADA based in West Bromwich, Birmingham for the past four months. The role I was allocated was working with the female victims of domestic violence that attended our drop in centres. The skills I had to put into practice were my communication and listening skills which are key in these intense situations. I had to be empathetic and understanding at all times in order to make the individual feel as eased and relaxed as possible. The individual had to feel that I was approachable and leave our support group feeling they had options, that they had support or even that they have unloaded feelings which they had kept bottled up for years. Our support group works alongside other agencies in the Criminal Justice System such as the Police, Social Workers and The Courts. We hold sufficient information on individual cases and try to guide the females to take further actions against perpetrators when they come to the realisation that the way they are treated is wrong. The courts use this information to punish them accordingly. This can only happen when the woman has come out of the denial stage. ...read more.

If there are language barriers then interpreters should be used, but the disadvantage to this maybe that she too is from the same community, the woman may hesitate in anything just in case it gets back to the family. Research by Frost (1997) argues that health professionals often fail to identify domestic violence or provide appropriate support, this time placing more emphasis on health visitors. This is because they lack understanding, taking a judgmental approach and failing to ask probing questions or fail to refer to appropriate agencies. Midwives too, see more of these women than anyone else, if Domestic Violence escalates during pregnancy which has life threatening consequences for women and babies, (Bewley, 1994) then they need to be tuned in and be aware of approaching the problem sensitively and be familiar with the services available for the Muslim women. The work of Bewley (1994) suggests that awareness could be raised among midwives and mothers by displaying posters in ante-natal clinics and women's toilets, raising issues in parent education classes and also discussing Domestic Violence sensitively during the booking visit educating the Muslim women to realise that Domestic Violence is a criminal offence and help them to put a stop to it. By having a resource folder with vital information may also be beneficial bearing in mind that they are translated in different languages. Some Muslim women with superficial ties to Islam do not know that abuse is unacceptable due to their weak faith, poor Islamic knowledge and lack of interaction with the Muslim communities, so this area needs to be worked on by the Muslim community and religious leaders along with other services (Q-News, 1999, Al-Khattab, 1997 & Abadalti, 1993). Although, Domestic Violence is no longer a hidden subject in the West it is still a taboo subject in the East and the little help that is available is often ignored. Research by Moss & Taylor (1991) ...read more.

It can be concluded, that Domestic Violence is an issue which will remain in our societies, despite the race, ethnic background and social status and women will remain the subjects. There are a number of services which are available for women in general, but so little availability of research concerning the Muslim woman indicates that more research needs to done in this field so that more support can be made available for these women. A message which can be left for health professionals i.e. midwives, health visitors and general practitioners that they need to be tuned into Domestic Violence, and be able to provide sound information without a judgmental attitude. Another message goes to religious leaders that they too need to be aware about Domestic Violence and provide services that enable the Muslim women to access without the fear of any stigma attached to them It can be said that due to word restriction the author could not discuss the services available on the Internet, which also has its disadvantages along with advantages. An insight into the difficulties faced by agencies has identified major problems and barriers which need to be looked at and overcome in order to limit the amount of cases that continue to go on unnoticed by anyone. All women need to feel they have appropriate help out there who can guide and assist them in times of need. More funding needs to be given by the government in order to retrain workers and make people generally aware of the difficulties that are faced and ignored in society. If a Muslim woman can feel that she has support out there and will be subject to the same standard as help as everyone else and will be treated equally and fairly, the amount of women who will continue to suffer in silence will be reduced which is the main aim of organisations dealing with Domestic Violence and all aims are made to be achieved. ...read more.