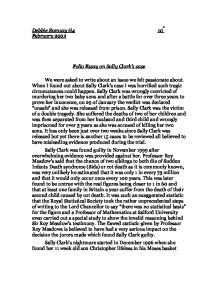 Debbie Ramsay G4 10th February 2003 Folio Essay on Sally Clark's case We were asked to write about an issue we felt passionate about. When I found out about Sally Clark's case I was horrified such tragic circumstances could happen. Sally Clark was wrongly convicted of murdering her two baby sons and after a battle for over three years to prove her innocence, on 29 of January the verdict was declared "unsafe" and she was released from prison. Sally Clark was the victim of a double tragedy. She suffered the deaths of two of her children and was then separated from her husband and third child and wrongly imprisoned for over 3 years as she was accused of killing her two sons. It has only been just over two weeks since Sally Clark was released but yet there is another 15 cases to be reviewed all believed to have misleading evidence produced during the trial. Sally Clark was found guilty in November 1999 after overwhelming evidence was provided against her. Professor Roy Meadow's said that the chance of two siblings to both die of Sudden Infants Death syndrome (Sids) ...read more.

In October 2000 appeal court judges threw out Sally Clark's first attempt to have her conviction quashed saying there was "overwhelming" evidence to support the conviction but Sally and her supporters didn't give up. Her family and friends never lost hope of seeing her come home a free woman. Her husband Stephen, sold their home and left his job to work on helping Sally to be released and looking after their surviving son she gave birth to after Harry had died. It took Stephen two years to obtain Harry's medical records, in it he found that tests had been carried out showing Harry was suffering from a bacterial infection called Staphylococcus aureus the same bug that causes MRSA, the hospital acquired infection. This indicates that baby Harry died of natural causes. The tests were carried out by the prosecution pathologist Dr Alan Williams who didn't disclose to the court that he had carried out the tests or the results he found. He is now under investigation by the General Medical Council. Since Sally Clark's first appeal research has discovered that a particular gene was very common among cot death babies this gene claims the life of one baby a day in the UK and is the most common cause of death in infants under the age of one. ...read more.

I have done a lot of research into this case and I believe that the women are unfairly treated they are found guilty while there is only statistical basis and no evidence. This kind of case doesn't seem to follow the normal belief that your innocent until proven guilty but as it is in the press now there is a lot of support for these women as many people believe that it is a miscarriage of justice. I hope that there will be a review as to how a fairer case can be created for these women if they do have to go to court although if there is no evidence I don't think it should be pursued. Its so great to see the support that Sally Clark received from her family they had no doubt that she was innocent which is what she needed to keep strong. I can't imagine what it would be like to lose two of my children to cot death let alone be separated from my family and be accused of killing my babies. Sally Clark has missed such important times in her young surviving sons life like his first steps, his first words. It's a shame such a tragedy wasn't ended years ago as there wouldn't be so many lives turned upside down. ...read more.