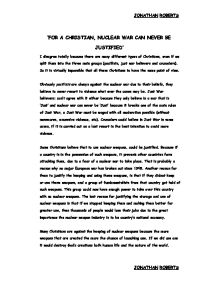 For a Christian, Nuclear War Can Never Be Justified

'FOR A CHRISTIAN, NUCLEAR WAR CAN NEVER BE JUSTIFIED' I disagree totally because there are many different types of Christians, even if we split them into the three main groups (pacifists, just war believers and crusaders). So it is virtually impossible that all these Christians to have the same point of view. Obviously pacifists are always against the nuclear war due to their beliefs, they believe to never resort to violence what ever the cases may be. Just War believers; can't agree with it either because they only believe in a war that is 'Just' and nuclear war can never be 'Just' because it breaks one of the main rules of Just War, a Just War must be waged with all moderation possible (without massacres, excessive violence, etc). ...read more.

then thousands of people would lose their jobs due to the great importance the nuclear weapon industry is to be country's national economy. Many Christians are against the keeping of nuclear weapons because the more weapons that are created the more the chance of launching one. If we did use one it would destroy God's creations both human life and the nature of the world. Some Christians believe that you should love everyone and not bring harm to anyone, if you are keeping these weapons it is going against God whole theory of, "love thy neighbour as yourself" Many Christians are also against nuclear weapons because they are very expensive to build and to keep improving them. Nower days, a lot more money is spent on the keeping of nuclear weapons than the development aid to poorer countries. ...read more.

The Christians, who believe in the just war theory, cannot support nuclear war because a war can never be just. It can never be just, because nuclear weapons are so explosive, that you could not distinguish between non-combatants and combatants. Also another reason to not use nuclear weapons, is that the damage and grief caused by such a weapon can never be equalled in damage and grief from a common war with common weapons such as guns. Therefore different types of Christians from the main three groups (pacifists, just war believers, and crusaders) can think differently about justifying a nuclear war. On over all I think most Christians are strongly opposed to justifying nuclear war. So on overall, most Christians are opposed to it, because they think of it as a blasphemy against God. JONATHAN ROBERTS JONATHAN ROBERTS ...read more.