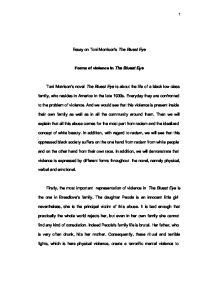 Forms of violence in The Bluest Eye

Essay on Toni Morrison's The Bluest Eye Forms of violence in The Bluest Eye Toni Morrison's novel The Bluest Eye is about the life of a black low class family, who resides in America in the late 1930s. Everyday they are confronted to the problem of violence. And we would see that this violence is present inside their own family as well as in all the community around them. Then we will explain that all this abuse comes for the most part from racism and the idealized concept of white beauty. In addition, with regard to racism, we will see that this oppressed black society suffers on the one hand from racism from white people and on the other hand from their own race. In addition, we will demonstrate that violence is expressed by different forms throughout the novel, namely physical, verbal and emotional. Firstly, the most important representation of violence in The Bluest Eye is the one in Breedlove's family. The daughter Pecola is an innocent little girl nevertheless, she is the principal victim of this abuse. It is bad enough that practically the whole world rejects her, but even in her own family she cannot find any kind of consolation. Indeed Pecola's family life is brutal. Her father, who is very often drunk, hits her mother. Consequently, these ritual and terrible fights, which is here physical violence, create a terrorific mental violence to Pecola. ...read more.

The other aspect of violence in the book is the presence of racism. It is interesting to notice that there are different forms of racism. The first expression of this violence appears between black people namely between the same race. In fact, they believe the stereotypes about their own race and imagine that European American are superior in beauty, morality and intelligence. This is represented in the book by physical violence and verbal abuse mainly throughout Pecola's character. Indeed, she is always victim of cruel and brutal jokes, which usually refer to her very dark skin and her dismembered family. For instance, once in the playground four young black boys hold her hostage inside a small circle that they had formed and were tormenting her by chanting about her blackness and father's supposed habit of sleeping naked, as if they were not black themselves. It is important to pay attention to the fact that if racism is coming from your own race , it also hurts and the wound left is more severe and painful. This physical violence here increases psychological violence in Pecola, which is one of the causes of her destruction. As far as this problem is concerned, a more ambiguous category of racism exists. It is a racism, which distinguishes between black people and coloured people. This latter has a lighter colour of skin and at this time the lighter your are the better it is. ...read more.

Indeed, the doctors come by her bed and the attending physician says "these here women you don't have any trouble with. They deliver right away and with no pain. Just like horses.The young ones smiled a little." (pp.124-125). Here the verbal abuse is very strong and cruel. It is an unbelievable scene, which by the same way demonstrates up to where the racism can go. Indeed, the doctors dehumanize Pauline comparing her to an animal. So the gaze in this passage is very important, it shows the disdain and ignorance of the white people. In conclusion, mixing all the forms of violence, Toni Morrison succeeded in highlighting the relevant aspect of the novel. The topic of violence, which is present from the beginning to the end of the book has been very well explored by her. The use of Pecola's character as the victim of all this cruelty has made the novel even more touching and moving. All this pushes the reader to have a critical point of view despite the focalized narrator Claudia. Nevertheless, the top of this violence is the presence of racism. Morrison has exploited both white/black racism and black/black racism. The latter is found to be especially prevalent and revolting in this novel. However, is it very reasonable to condemn the oppressors , are they not also victims of their past or ancestors ideology ? It creates an ambiguous question that everyone is free to interprete and makes the novel even more rich. 1 ...read more.