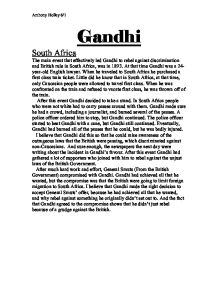 The main event that effectively led Gandhi to rebel against discrimination and British rule in South Africa, was in 1893. At that time Gandhi was a 24-year-old English lawyer. When he traveled to South Africa he purchased a first class train ticket. Little did he know that in South Africa, at that time, only Caucasian people were allowed to travel first class. When he was confronted on the train and refused to vacate first class, he was thrown off of the train.

After this event Gandhi decided to take a stand. In South Africa people who were not white had to carry passes around with them. Gandhi made sure he had a crowd, including a journalist, and burned several of the passes. A police officer ordered him to stop, but Gandhi continued. The police officer started to beat Gandhi with a cane, but Gandhi still continued. Eventually, Gandhi had burned all of the passes that he could, but he was badly injured.

I believe that Gandhi did this so that he could raise awareness of the outrageous laws that the British were passing, which discriminated against non-Caucasians.  And sure enough, the newspapers the next day were writing about the incident in Gandhi’s favour. After this event Gandhi had gathered a lot of supporters who joined with him to rebel against the unjust laws of the British Government.

After much hard work and effort, General Smuts (From the British Government) compromised with Gandhi. Gandhi had achieved all that he wanted, but the compromise was that the British were going to limit foreign migration to South Africa. I believe that Gandhi made the right decision to accept General Smuts’ offer, because he had achieved all that he wanted, and why rebel against something he originally didn’t set out to. And the fact that Gandhi agreed to the compromise shows that he didn’t just rebel because of a grudge against the British.

In 1915, Gandhi returned from South Africa to India. He came back satisfied and happy, the Indians had held a parade for him on his return. He was carted through the streets and this was when he noticed poor Indians who looked starved and were barely clothed. He realized the injustices and restrictions that the Indians faced because of British rule. For example, Indians were not allowed to manufacture salt from their own ocean. Once again Gandhi gathered supporters. He told them to start boycotting British trade, to burn British products, and he told them to challenge some of the British laws, but never did he tell them to use violence.

At a time when Gandhi was imprisoned for rebelling, a disturbing event occurred. It was against the law to hold unsanctioned meetings in a public area, and a group of almost two thousand Indians were breaking that law. A person in the crowd was preaching the word of Gandhi. This meeting was cut short when the army blocked off all of the exits to the meeting place, and shot all of the people there with no warning. Almost 2000 Indians died at that scene, and the person who instructed to army to fire without warning was never penalized.

Eventually after this, Gandhi decided that the British were unfit to rule India.

In general I believe that Gandhi was a good man. In fact I admire Gandhi because he fought for the justice of people who couldn’t fight for themselves, and in doing so he suffered a great deal. For example when he was in South Africa he was beaten severely and imprisoned. In India he suffered imprisonment and he fasted until he was on the brink of death.

Although Gandhi may have neglected his wife and family, I believe that he could not have possibly led the role of an ideal father and husband, whilst rebelling against injustices. Gandhi helped the public in India and South Africa immensely, and I imagine he tried to care for his family at every other opportunity available.

The thing I admire most about Gandhi is how he united two separate religions into his campaign. I also believe that Gandhi was very clever, and realized that if he had used violence to tackle the British rule, he probably could never unite the two religions as solidly as he did. For example, the people who followed Gandhi, regardless of their religion, were prepared to put their own lives in jeopardy for his cause. And that is precisely why I admire Gandhi as an intelligent and selfless person. 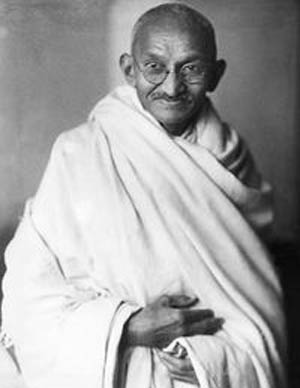