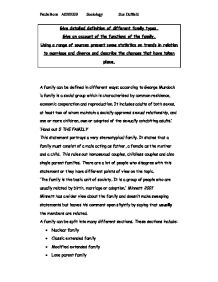 Give detailed definition of different family types. Give an account of the functions of the family. Using a range of sources present some statistics on trends in relation to marriage and divorce and describe the changes that have taken place. A family can be defined in different ways; according to George Murdock 'a family is a social group which is characterised by common residence, economic cooperation and reproduction. It includes adults of both sexes, at least two of whom maintain a socially approved sexual relationship, and one or more children, own or adopted of the sexually cohabiting adults.' 'Hand out 5 THE FAMILY' This statement portrays a very stereotypical family. It states that a family must consist of a male acting as father, a female as the mother and a child. This rules out homosexual couples, childless couples and also single parent families. There are a lot of people who disagree with this statement or they have different points of view on the topic. ...read more.

The reconstituted family is a second marriage for one or both of the adults, and they bring their children from a previous marriage with them in to the new marriage. These families often made from lone parent families or straight from a nuclear family in the case of an affair. There are many different important functions in a family. Regulate sexual behaviour is essential in a family, by marking family members and including them in the family this reduces the chance of incestuous relationships. Restricting sexual activity to your own married partner there is less chance of disputes in the society and it will help reduce uncontrolled sexual activity. Reproduction is essential to keep the human race alive. If the family is strong and stable then the child has a good chance of having a safe and secure upbringing a childhood. There is a great need in society to teach children what is socially acceptable way to act and behave. ...read more.

Divorce rates on the other hand are rising. The graph below proves my point about the divorce rates. Divorce graph from 1961 to 2005 ref http://www.statistics.gov.uk/cci/nugget.asp?id=170 As you can see on the graph presented above divorce rates in 1961 were very low. There was a dramatic increase between 1969 and 1974 and since then still rising slightly. Marriage rates from 1950 - 2005 As you can see from the graph above there was an increase of about 80 thousand between 1961 and 1972 only to be followed by a decrease between 1972 and 2005 taking the marriage rate lower than it was in 1950. The first marriage line on the graph follows the same trend as the all marriages line with the increase between 1961 and 1972 and the same decrease after that taking the rate in 2005 lower than the rate in 1050. Remarriage as you can see by the graph has unlike the marriage rate itself, has had an increase in the past 50 years by approximately 30 thousand. ?? ?? ?? ?? Paula Bone A0200339 Sociology Sue Duffield ...read more.