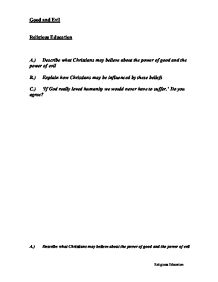 Good and Evil Religious Education A.) Describe what Christians may believe about the power of good and the power of evil B.) Explain how Christians may be influenced by these beliefs C.) 'If God really loved humanity we would never have to suffer.' Do you agree? A.) Describe what Christians may believe about the power of good and the power of evil The Christian God is believed to be both loving and omnipotent. Christianity teaches that as well as a power of good there is also a power of evil - traditionally this is said to be Satan (or Lucifer), one of the archangels who disobeyed God and was sent to hell (Luke 10:18). Christians believe that the power of evil, almost like a force, can persuade people to do the wrong thing. They also believe that it is up to the individual person to make the right choice and to follow God's teachings, as God will judge us on how we lived our lives, and whether or not we lived good lives. The Old Testament teachings on the power of good and evil are based predominantly on the story of Adam and Eve. The teachings in the Old Testament of good and evil are in two chapters mainly; 'Genesis' and 'Job'. Christians believe that the first ever sin was committed in the Garden of Eden. It is written in the creation story in Genesis that Adam and Eve disobeyed a direct command from God, thus committing the first sin. God said, "The man has now become like one of us, knowing good and evil." (Genesis 3:22). God created Adam and Eve innocent but with the ability to choose right or wrong. ...read more.

Another explanation to clarify the reasoning behind the existence of evil derives from Genesis. Many Christians believe that it is because of Adam and Eve that sin entered our world. Although God created Adam and Eve as innocent human beings, once they had committed their sin they became guilty and sinful, inflicting upon future generations a 'curse'. Often, people wonder whether or not God knew if Adam and Eve would disobey Him, or even if He was aware of what the serpent was doing. If so, why would He let it happen? If not, God is supposed to be all-knowing, so why not? A popular Christian answer is that God created human beings with free-will to choose between good and evil, and although He created Adam and Eve as being pure, innocent beings, he also graced upon them the ability to choose for themselves when the time came to either follow or ignore His teachings and the power of good, and they chose to ignore His teachings. An ethical monotheist is someone who believes in one God, and wants to act and behave just like God. For these ethical monotheists the teachings of God are the teachings that they will live by, imitating God by refusing to succumb to the power of evil. This is one example of Christians being influenced by God and His teachings, which would include His take on the power of good and the power of evil. Some Christians might argue that although God allows this evil force to exist, he wants us to act according to His rules and teachings, for example keeping the 10 Commandments. Christians attempt to follow the teachings of God in order to please Him. ...read more.

Darkness is the absence of light, similarly evil is the absence of good, or better, evil is the absence of God. I believe that God did not have to create evil, but rather only allow for the absence of good. Satan wanted to destroy Job, and God allowed Satan to do everything but kill Job. God allowed this to happen to prove to Satan that Job was righteous because he loved God, not because God had blessed him so richly. God is sovereign and ultimately in control of everything that happens. Satan cannot do anything unless he has God's "permission." Therefore I conclude that God did not create evil, but He allows evil. Suffering is often directly tied to building character. It is believed that we are kind to people because we know what it would feel like to have someone unkind to us, so, surely, we must experience suffering if only to help others avoid the same thing. Some believe that the purpose for every human being's life is to develop the perfect, holy, righteous character of Almighty God. The Holy Spirit, given at conversion to those who obey God (Acts 2:38; 5:32), defines God's character, "But the fruit of the Holy Spirit is love, joy, peace, longsuffering, gentleness, goodness, faith, meekness, temperance" (Gal. 5:22-23). God is describing His spirit as longsuffering, and some people believe that because God has suffered, we must suffer ourselves in order to develop our characters. To conclude, I do not agree with the statement. I believe that God loves humanity and that the suffering which occurs in the world, no matter how horrible or ghastly, is required by God for some reason unbeknownst to me. I, like Job, have come to accept that if I cannot understand God, I must retain my faith in Him at all times and carry on obeying His teachings. ...read more.