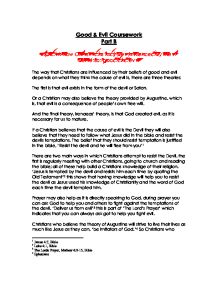 The way that Christians are influenced by their beliefs of good and evil depends on what they think the cause of evil is, there are three theories:

The first is that evil exists in the form of the devil or Satan.

Or a Christian may also believe the theory provided by Augustine, which is, that evil is a consequence of people’s own free will.

And the final theory, irenaeas’ theory, is that God created evil, as it is necessary for us to mature.

There are two main ways in which Christians attempt to resist the Devil, the first is regularly meeting with other Christians, going to church and reading the bible; all of these help build a Christians knowledge of their religion. ‘Jesus is tempted by the devil and resists him each time by quoting the Old Testament’[2]2 this shows that having knowledge will help you to resist the devil as Jesus used his knowledge of Christianity and the word of God each time the devil tempted him.

Prayer may also help as it is directly speaking to God, during prayer you can ask God to help you and others to fight against the temptations of the devil. ‘Deliver us from evil’[3]3 this is part of ‘The Lord’s Prayer’ which indicates that you can always ask got to help you fight evil.

Most Christians believe in heaven and hell. ‘And theses will go away into eternal punishment, but the righteous to eternal life.’[5]5 Heaven is believed to be a place where those who have lived a life that follows Gods commandments and have faith in Jesus will go to spend eternity in a paradise with god.

Hell is believed to be a place where those who have lived evil lives will be sent to spend eternity with the devil in torment and pain. This could be taken to mean literal pain whilst some other Christians think that hell is not a place of torment but just an existence without god.

As Christians do not want to go to hell they will try to live there lives I the best way possible so that they are able to spend their lives in an eternal paradise with God.