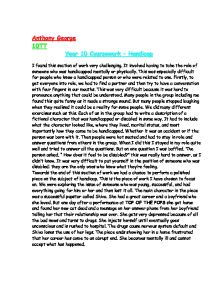 Handicap - the presenter of Top of the pops.

Anthony George 10TT Year 10 Coursework - Handicap I found this section of work very challenging. It involved having to take the role of someone who was handicapped mentally or physically. This was especially difficult for people who knew a handicapped person or who were related to one. Firstly, to get everyone into role, we had to find a partner and then try to have a conversation with four fingers in our mouths. This was very difficult because it was hard to pronounce anything that could be understood. Many people in the group including me found this quite funny as it made a strange sound. But many people stopped laughing when they realised it could be a reality for some people. We did many different exercises such as this. Each of us in the group had to write a description of a fictional character that was handicapped or disabled in some way. It had to include what the character looked like, where they lived, marital status, and most importantly how they came to be handicapped. Whether it was an accident or if the person was born with it. ...read more.

DJ. Then later in the piece I was one of the hallucinate images of Shiva's brain when she was injecting drugs. We used a method called physical theatre where three of us surrounded Shiva, who was in the centre and used specific movements to surround her and acted as her out of control mind. While this was happening some music was playing, by MOBY. The music was good for this part because the only lyric was "Why does my heart feel so bad?" which was what Shiva's character was feeling. After this scene, when Shiva was in hospital I was a news reporter, reporting on Shiva's drug overdose. The last character I played was a nurse in the home Shiva was living in, the character was quite young, once a fan of Shiva. Each of the characters I played were all very different, and worked well because for each I changed the way in which I portrayed myself, and the way I spoke. The development of the piece came quite easily as each scene was quite short and had few lines in it. We decided our characters by deciding which of us in the group could do certain things. ...read more.

If I were to go back to this particular piece I would do a few things differently. I would take out the hospital scene and replace it with a scene where a neighbour of Shiva finds her unconscious and calls 999, and an ambulance comes and takes her to hospital. I think this would work well because it adds tension to the piece and makes the characters of Shiva seem more personal, someone the audience can have some sympathy for. Another thing I would do differently would be the physical theatre scene at Shiva's home. I think it could be more effective if some dramatic lighting was used, such as strobe lighting, because it would make it look more chaotic. Apart from those two things I wouldn't change anything because the piece was quite unique in the drama group and it had a clear message. Towards the end of this section we did some forum theatre where two parents were being told their son was paralysed. Each person who played the parents had very different portrayals. Some chose to deny what was going on others just broke down. The whole group helped to develop each character in different ways. Overall I enjoyed this section of work, because it dealt with issues I'm interested in. ...read more.