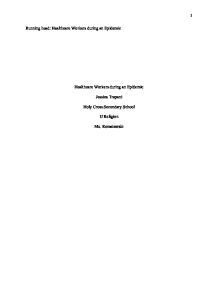 Healthcare Workers during an Epidemic

Running head: Healthcare Workers during an Epidemic Healthcare Workers during an Epidemic Jessica Trapani Holy Cross Secondary School U Religion Ms. Romatawski Healthcare Workers during an Epidemic When most people choose a career in healthcare, they think of a future that is filled with hopes of steady income and going home with a self gratitude of saving lives. What happens to these dreams when the healthcare provider is affected by an epidemic that has spread throughout the workplace, country and their own lives are in danger? For example, many lives were effected in 2003 when the SARS outbreak invaded Canada (Krowe, 2003). 206 humans died from the Avian influenzsa in twelve countries according to World Health Organization data as of November 2007 (Wikipedia, 2008,). This essay will examine how the "ripples" of an epidemic can spread very quickly into the lives of those nurses, doctors and all healthcare providers who treat the victims of an epidemic. ...read more.

It also creates limitations in their social and family life, by not being able to spend time with family and friends. It increases a persons stress and anxiety which can ripple into their own health concerns, such as fatigue, headaches and concerns of catching the contagious outbreak. When an epidemic outbreak occurs, many healthcare professionals are under pressure since they are the experts in the health field and should know what to do. Because they have to let the public know what is going on, the community puts demands on doctors and hospital staff to find out how a disease or virus, whether it is contagious or not, could get out of hand and impact the whole community. By taking preventative measures, such as disinfecting, quarantining, and advising no visitation in hospitals, health officials can concentrate on those patients who are infected without spreading the disease even more. But the public can take two sides. One is a sense of respect and sympathy for those who have to come in contact with patients who are infected. ...read more.

Another is to have better communications to improve the probabilities and uncertainties associated with epidemic concerns (Aikimbayev, 2003). For example, the outbreak of SARS started in china. Had there have been earlier awareness, those people affected should not have been able to come to Canada. This could have limited the virus. Improving vaccine selection can also be an advantage due to earlier epidemics (Osterhaus, 2002). From past occurrences, epidemics such as; the measles, malaria, and chicken pox, vaccinations have been developed to tame the virus. Though some people still refuse the vaccinations, it has been proven to limit the virus (Osterhaus, 2002). In conclusion, health care workers who work during an epidemic put their lives in danger. The providers go beyond their duties to keep the epidemic to a minimal. Yet, the public gives mixed responses by either supporting the workers or giving them no respect. While it's easy to focus on the negative aspects of an epidemic, there are many advantages. Due to the many outbreaks that we have had in the past, healthcare workers gain more experience minimizing the amount of victims that are affected in society. ...read more.