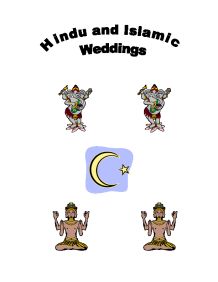 Title Page Pg 1 Hindu Marriages Pg 2-5 Islamic Marriages Pg 6-9 My Vows Pg 10 Biboliography Pg 11 Hindu marriages are very traditional. Before the ceremony, the priest blesses the bride's bangles and it is considered unlucky if she removes them before forty days after the wedding. The groom arrives with his family at his wedding party and is welcomed by the girl's family. Some brides greet the groom by putting a flower garland around his neck after the girl's mother has already done so. The groom may also choose to do the same. When the bride and groom go inside the temple, the priest calls for Ganesha's blessing for success; followed by the Navgraha prayer (asking the blessing of all of the planets for peace and wealth). Then the maternal uncle and the sisters walk the couple to the mendap (wedding tent) where the girl's father performs kanya danam (handing over ceremony to the priest). By spreading turmeric on her hands, she recognizes her change in status from a single woman, a daughter to a wife. The father then places his daughter's dyed hand on the groom's hand and he holds it as a symbol of everlasting love. By pouring out some of the sacred water, the father 'washes his hands' and gives his daughter away to the groom. ...read more.

is tied around the girls necks. Some Hindus use threads with the marks of the Hindu gods, Vishnu or Shiva instead (Mangal Sutra Dharana). To show that they are married, the husband puts red powder (sindhoor) in the middle of his newly wed wives hair. This tradition comes from the north-east of India. The groom's parents welcome the new bride to the family after blessing the couple. They offer the newly wed couple cloth and the guests shower them with flowers to ward off evil. That is the traditional way of a Hindu marriage. Muslims often have arranged marriages. The parents of the boy propose to the parents of the girl. Although it is believed that parents are the best judges and will find a good husband or a wife for their child. The children must agree as well because there is no point getting married if you don't get along with the person you are marrying. There are 3 parts to a modern Muslim marriage, the Nikah (Agreement to marry), the Thail Mehndi (hen night and stag night) and the walima (party from boy's side). The Thail Mehndi is performed before the Nikah followed by Walima. However, in a traditional Islamic wedding there is the Nikah and the Walima only. In both receptions it is advised to ensure it is done as simple as possible with no debt incurred in order to have a grand wedding. ...read more.

Sometime over 800 guests are invited and the tables are set 3 or 4 times to accommodate all the quests. The marriage may have started at 1 0' clock but some of the guests don't get served until three hours later. Also in traditional weddings the men are segregated from the women. A stage is set up where the bride and groom are seated with their immediate family members. A Muslim wife has many rights, which are agreed in the wedding contract. Prior to the wedding an agreed amount of money (Mahr) is acknowledged by the boy's parents. This money is given to the bride when she gets married by the groom. In some cases brides decide not to accept the money. This money is a kind of security for the girl in Islam if unfortunately the marriage breaks down and results in seperation. This is the way of an Islamic Marriage If I were in the position of marrying a man I would say this for my vows: I love you ............ and I know that you love me. For years I have prayed that God would lead me to the right man, and now that day has come. I promise to be faithful to you. I will love, serve, and obey you as long as we both are alive. Information: Hindu Marriage www.saranam.com/wedding/default.asp Islamic Marriage www.jamiat.org.za/isl_wedding.html Pictures: Hindu Pictures Word Clipart Islamic Pictures Word Clipart ...read more.