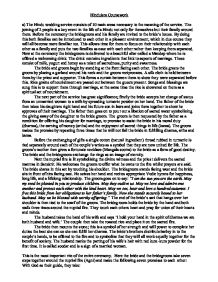 Hinduism Coursework a) The Hindu wedding service consists of 10 main areas necessary to the meaning of the service. The joining of 2 people is a key event in the life of a Hindu not only for themselves but their family around them. Before the ceremony the bridegroom and his family are invited to the bride's house. By doing this both families can be introduced to each other in a pleasant environment, which in due course they will all become more familiar too. This allows time for them to focus on their relationship with each other as a family and puts the two families as ease with each other rather than keeping them separated. Now at the ceremony the bridegroom is delivered to a beautiful altar called a Mandap where he is offered a welcoming drink. The drink contains ingredients that link to aspects of marriage. These consist of milk, yogurt and honey as a token of sacredness, purity and sweetness. The bride and groom begin by standing at the front facing each other. The bride greets the groom by placing a garland around his neck and the groom reciprocates. A silk cloth is held between them by the priest and supporter. This forms a curtain between them to show they were separated before this. Rice grains of nourishment are passed out between the guests present. Songs and blessings are sung this is to support them through marriage, at the same time the rice is showered on them as a spiritual act of nourishment. The next part of the service has great significance; firstly the bride accepts her change of status from an unmarried woman to a wife by spreading turmeric powder on her hand. The father of the bride then takes his daughters right hand and his future son in laws and joins them together to show he approves of their marriage. ...read more.

This gives instruction to the bride and the groom as how they should stand in their marriage. The husband should lovingly care and be responsible for his wife and the wife should understand he has more authority over her and she should honour him. The exchanging of names reminds them how they are still bound to each others family despite the renewal of their own. The husband makes promises of Dharma, artha and kama. This guides the husband in how he should contribute to the marriage and what he should fulfil according to his duty. His moral duty as the husband should be to protect his wife and honour her during this he is fulfilling the role of the father too and rules such as satya. Satya applies to both the bride and the groom as a whole. Truthfulness is extremely important to maintain the trust inside the relationship this is a way of guiding the couple that nothing should be kept from each other; by doing they are aware of each others concerns and become closer as a couple. The groom should also earn money in order to provide for his family this allows them not to struggle during marriage as they have enough enjoy the privileges of marriage like family holidays. This also guides him into working hard at his job so he can earn more money. Finally to ensure enjoyment, without this a marriage is worthless he should take this as his responsibility to bend over backwards to enable his wife to be happy this could include taking her out for dinner. The exchanging of gifts is a symbolic way of how each family become bound to each other not just the husband and wife. To the husband and wife it guides how they must share all their possessions inside a marriage and how nothing belongs to one and not the other. ...read more.

There would be far less crime as people would own up to it, resulting in a far less likelihood to commit a crime. People would be happier through no lies and the respect for each other through that. Overall the world would be a better place It is part of a wife's duty (dharma) to honour her husband. This is influenced in marriage through leaning on the grooms shoulder. It shows she is dependant on him and he has authority over her. I believe this is wrong. Again I stand by the fact men and women are equal and equally dependant on each other and that the Hindu wedding service introduces a patriarchal approach to the world today. If one had a higher status than the other if could cause unemployment through jobs as they would prefer the higher gender. It would cause arguments in families. In politics you would not be able to hear ones point of view as it would not be valid. In marriage it would increase quality if they both were equal and each did jobs around the home instead of putting strain on one person to do it all the time, this is why it is relevant to the world. Marriage as a whole has the soul input of love (prema). Verbal statements present this "May we love and admire one another" and actions show this such as "exchanging of gifts". I believe love comes into every aspect of life as a benefit. The caring of nature helps towards preserving animals and plants that are currently going extinct. The appreciation of each other enables people to love at harmony with one another helping them with their lifestyles instead of leaving them to struggle. The ability to love the poor guide's people to provide for them in what ever they have. Finally the gift to love what you acquire helps people to be content with what they have and the desire to have more. As a result making the world a happier place. By Natasha Godfrey USG ...read more.