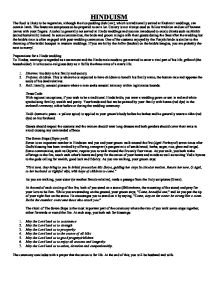 The food is likely to be vegetarian, although the rice pudding dish (var), which is traditionally served at Kashmiri weddings, can contain lamb. The feasts are sumptuous so be prepared to eat a lot. Cutlery is not always used so follow tradition and eat off banana leaves with your fingers. Alcohol is generally not served at Hindu weddings and you are introduced to exotic drinks such as Mathis (salted buttermilk) instead. In some communities, the bride and groom mingle with their guests during the feast after the wedding but the bride's time is often engaged with post-wedding ceremonies. One of the customs enjoyed by the Punjabi bride is similar to the throwing of the bridal bouquet in western weddings. If you are hit by the kalira (bauble) ...read more.

in the mehendi ceremony, either before or during the wedding ceremony. Haldi (turmeric paste - a yellow spice) is applied to your groom's body before he bathes and he generally wears a tikka (red dye) on his forehead. Guests should respect the customs and the women should wear long dresses and both genders should cover their arms to avoid causing any unintended offence. The Seven Steps (Sapta padi) Seven is an important number in Hinduism and you and your groom walk around the fire (Agni Parinayai) seven times after God's blessing has been invoked by offering samagree (a pungent mix of sandalwood, herbs, sugar, rice, ghee and twigs). Some communities, such as Gujarati, require you to walk around the fire only four times. ...read more.