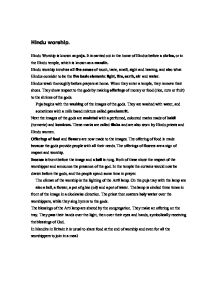 Hindu worship. Hindu Worship is known as puja. It is carried out in the home of Hindus before a shrine, or in the Hindu temple, which is known as a mandir. Hindu worship involves all five senses of touch, taste, smell, sight and hearing, and also what Hindus consider to be the five basic elements: light, fire, earth, air and water. Hindus wash thoroughly before prayers at home. ...read more.

These marks are called tilaka and are also worn by Hindu priests and Hindu women. Offerings of food and flowers are now made to the images. The offering of food is made because the gods provide people with all their needs. The offerings of flowers are a sign of respect and worship. Incense is burnt before the image and a bell is rung. Both of these show the respect of the worshipper and announce the presence of the god. ...read more.

and a pot of water. The lamp is circled three times in front of the image in a clockwise direction. The priest then scatters holy water over the worshippers, while they sing hymns to the gods. The blessings of the Arti lamp are shared by the congregation. They make an offering on the tray. They pass their hands over the light, then over their eyes and hands, symbolically receiving the blessings of God. In Mandirs in Britain it is usual to share food at the end of worship and even for all the worshippers to join in a meal. ...read more.