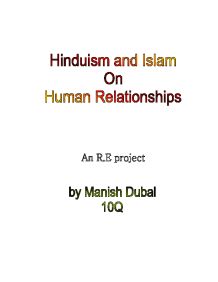 Hinduism and Islam on human relationships.

Front cover Page 1 Contents page Page 2 Views and beliefs on marriage Pages 3 and 4 Marriage ceremonies Pages 5 to 7 Views on sexual relationships and abortion Page 8 Roles of men and women Page 9 Hinduism Marriage in Hinduism is portrayed as a very important thing and examples of religious devotion to your partner can be found between Krishna and Radha or between Rama and Sita in the famous poem The Ramayana. Hindu gods get married and have children also. The gods also demonstrate what an ideal relationship with one's husband/wife should be. For example, the gods Shiva and Parvarti are often held up as the ideal couple. Women will often pray for a husband like Shiva and follow Parvarti's patient example in waiting for one to come along (It is said that Parvarti waited sixteen years until she met Shiva). Marriage is enforced in Hinduism and is regarded as a religious duty and choosing to stay single is not encouraged. One cannot reach moksha (release of the soul from the chain of rebirth) unless they fulfil their dharma (religious duty in life). Marriage is also the 13th samskara a Hindu will pass through in their life. The samskaras are sixteen rituals, which mark stages in a person's life (the first concerns the moment of conception whilst the last are the funeral rites). ...read more.

The bridegroom tells her to be as firm as the stone/ mountain so as to face the vagaries of the life ahead. The central part of the marriage ceremony is when the bride and groom circumbulate the sacred fire four times. (In some communities, this is done seven times.) This signifies the marriage contract between the couple to have been witnessed by the Gods through the sacred fire and the bride and groom take seven steps together. With each step they take a vow to be together, to grow together, to strengthen each other, support each other etc. and pray to the Gods that these vows will be fulfilled. Then the couple touch each others' heart and promise 'May my heart be thine and thy heart be mine. When I talk to thee, please listen to me with perfect attention. I promise to listen to thee with equal attention.' The marriage ceremony is completed by offering ghee in to the sacred fire. The priests bless the bride and groom and guests shower the couple with their own blessings, flowers and rice Islam The night before the actual wedding there is a party which takes place at the home of the bride. Then on the actual wedding day the family moves towards the place of marriage from the groom's house. ...read more.

Nowadays, especially with British Hindus, women and men have more equal roles and have shared roles. Islam Women and men have equal rights and duties in the household in Islam. Muslims are also taught that Allah will judge men and women equally. Women are allowed to take part in all equal activities such as studying, refusing to marry, voting in politics, owning their own businesses and inheriting. Even though men and women have equal rights, it is stated in Islamic teaching that men make the final decisions. Usually, men go out to work and the women stay at home but there is no law about this and women can go to work if they want. But, men are also expected to help at home. Here is a quote from a scripture called the sahih-Al-bukhari: 'A man asked the prophet o messenger of Allah, who deserves the best care from me? The prophet answers your mother. The man asked whom then? The prophet said your mother, he asked again and the prophet said your mother for the third time, then the man asked for the fourth the time and the prophet said you father' The explanation for this is that it was believed that the Prophet Muhammad showed more respect to women than men. ...read more.