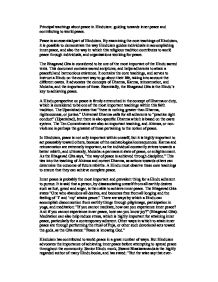 Principal teachings about peace in Hinduism: guiding towards inner peace and contributing to world peace. Peace is an essential part of Hinduism. By examining the core teachings of Hinduism, it is possible to demonstrate the way Hinduism guides individuals in accomplishing inner peace, and also the way in which this religious tradition contributes to world peace through individuals, and organisations working for peace. The Bhagavad Gita is considered to be one of the most important of the Hindu sacred texts. This document contains sacred scriptures, and helps adherents to attain a peaceful and harmonious existence. It contains the core teachings, and serves to instruct a Hindu on the correct way to go about their life, taking into account the different castes. It advocates the concepts of Dharma, Karma, reincarnation, and Moksha, and the importance of these. Essentially, the Bhagavad Gita is the Hindu's key to achieving peace. A Hindu perspective on peace is firmly entrenched in the concept of Dharma or duty, which is considered to be one of the most important teachings within this faith tradition. ...read more.

And if you cannot experience inner peace, how can you know joy?" (Bhagavad Gita). Meditation can also help reduce stress, which is highly important for attaining inner peace, particularly for a contemporary adherent. Other ways in which to attain inner peace are through performing the ritual of Puja, or other such devotional acts toward the gods, as the Gita states: "Peace is knowing God." Hinduism has contributed to world peace in a great number of ways. But Hinduism advocates the importance of achieving inner peace before attempting to spread peace throughout the community. Senior Hindu monk, Swami Bhaskarananda is the highly regarded author of many Hindu books, and has stated: "But the wise say that ever-enduring peace can never be obtained through external means. Through spiritual discipline alone this inner peace can be acquired. Therefore, say the wise, may all try to create peace within, before trying to create any temporary or superficial peace in the world through external means." ...read more.

The Shanti Sewa Ashram also promotes peace through seminars and conferences, and has plans to establish nursing homes, orphanages and meditations centres. These organisations are not only working for world peace through actions, but are also providing an example for other Hindu adherents to follow, by practising Dharma through Ahimsa. By gaining an understanding of the Hindu concepts of Dharma, Ahimsa and Moksha, shown through the sacred texts such as the Bhagavad Gita and Upanishad, the Hindu stance on peace can be observed. The importance of inner peace cannot be highlighted enough, as world peace cannot be achieved until inner peace has been realised. This is shown through various sacred scripture, and the teachings of Hindu scholars and activists, such as Gandhi. Many Hindu organisations are practising their religious duty of Dharma through working for world peace and putting their faith into action. All of these examples, plus many more serve as evidence to demonstrate the principle Hindu teachings on peace, and the way that Hinduism guides and contributes to both inner peace, and world peace. ...read more.