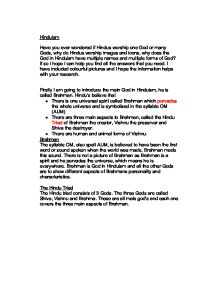 Hinduism - Have you ever wondered if Hindus worship one God or many Gods, why do Hindus worship images and icons, why does the God in Hinduism have multiple names and multiple forms of God?

Hinduism Have you ever wondered if Hindus worship one God or many Gods, why do Hindus worship images and icons, why does the God in Hinduism have multiple names and multiple forms of God? If so I hope I can help you find all the answers that you need. I have included colourful pictures and I hope the information helps with your research. Firstly I am going to introduce the main God in Hinduism, he is called Brahman. Hindu's believe that * There is one universal spirit called Brahman which pervades the whole universe and is symbolised in the syllable OM (AUM) * There are three main aspects to Brahman, called the Hindu Triad of Brahman the creator, Vishnu the preserver and Shiva the destroyer. ...read more.

These are all male god's and each one covers the three main aspects of Brahman. Brahma Brahma is the first god of the Hindu Triad, also known as the Trimurti, he is the creator god and is shown with four heads facing in four different directions, symbolizing that he created the whole universe. Brahma is shown with four arms, each holding a different item to show his personality and characteristics. Sometimes Brahma is shown sitting on a lotus to show purity and cleanliness. This is a picture of Brahma (Don't get Brahman mixed up with Brahma, Brahman is God and Brahma is an aspect of God.) Shiva Shiva is. the aspect of Brahman which destroys and recreates the universe. ...read more.

Each hand holds a different item symbolising different aspects of Hinduism. He has a vehicle, which is a swift - flying bird, which can spread the word of Hinduism with great courage. Vishnu rests on the bed of the powerful, coiled serpent, Seshanag who represents the sleeping universe. Lord Vishnu is also known as Hari, the remover. This is a picture of Vishnu. Is Hinduism monotheistic or polytheistic? This is one of the many questions that occur when talking about Hinduism and its Gods. Some people would say its polytheistic because hindus seem to worship more then one God. This is wrong because there is only one God in Hinduism and that is Brahman. The other Gods are just aspects of the one God, Brahman. Note: All words in red are explained in the word list at the back of the book Click here to visit Coursework.Info/ ...read more.