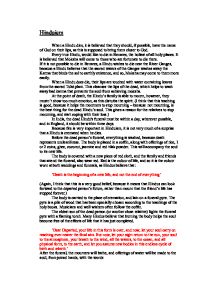 Hinduism - When a Hindu does dies.

Hinduism When a Hindu dies, it is believed that they should, if possible, have the name of God on their lips, as this is supposed to bring them closer to God. Every true Hindu, would like to die in Benares, the holiest of all holy places. It is believed that Moksha will come to those who are fortunate to die there. If it is not possible to die in Benares, a Hindu wishes to die near the River Ganges, because a Hindu believes that the sacred waters of the Ganges washes away the Karma that binds the sol to earthly existence, and so, Moksha may come to them more easily. When a Hindu does die, their lips are touched with water containing leaves from the sacred Tulsi plant. This cleanses the lips of the dead, which helps to wash away bad karma that prevents the soul from achieving moksha. ...read more.

Red is the colour of life, and so it is the colour worn at both weddings and funerals, as Hindus believe that: 'Death is the beginning of a new life, and not the end of everything' (Again, I think that this is a very good belief, because it means that Hindus can look forward to the departed person's future, rather than mourn that the friend's life has stopped forever.) The body is carried to the place of cremation, and lain on a funeral pyre. The pyre is a pile of wood that has been specially chosen according to the teachings of the holy books. Musicians and well wishers often follow the coffin. The eldest son of the dead person (or another close relative) lights the funeral pyre with a flaming torch. Many Hindus believe that burning the body helps the soul become free of the effects of life that it has just completed. ...read more.

This is correct for both children and adults.) Three days after the body has been burned, the bones are collected from the priest and placed into a river, especially the River Ganges. For the next ten days, Hindus recite prayers and leave offerings of food for the soul. The Hindu's family wears only white clothing, and simple food is only consumed. This is all done to show the spirit of the dead that the family is truly grateful for kind acts done in his life. By the tenth day, the spirit is ready to travel to the Land of Yama, the God of the dead. On the 11th day, the eldest son will shave his hair, and on the 13th day, the family holds a feast, which symbolises the end of mourning, and the start of normality. Although life does return to normal, simple offerings are made once a month to remember the dead. Hannah Jackson ...read more.