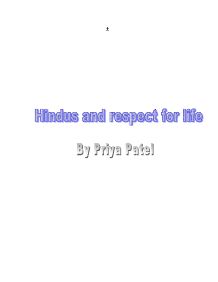 Hindus and respect for life.

+ Meaning of Ahimsa Ahimsa is a Sanskrit term that translates roughly into non-injury to living beings or dynamic harmlessness. Ahimsa tends to evoke images of monks wearing cloths over their faces to avoid breathing microscopic beings and sweeping the insects off the path in front of them as they walk so they won't accidentally crush one under their feet. One cannot easily live in today's world without causing some harm to other beings - but that does not mean we shouldn't try to keep it to a minimum. There are some relatively easy steps you can take to reduce the suffering in your wake. Practice of Ahimsa develops love. Ahimsa is another name for truth or love. Ahimsa is universal love. It is pure love. It is divine Prem. Where there is love; there you will find Ahimsa. Where there is Ahimsa, there you will find love and selfless service. They all go together. The one message of all saints and prophets of all times and climes, is the message of love, of Ahimsa, of selfless service. Ahimsa is the noblest and best of traits that are found expressed in the daily life and activities of perfected souls. Ahimsa is the one means, not only to attain Salvation, but also to enjoy uninterrupted peace and bliss. Man attains peace by injuring no living creature. There is one religion - the religion of love, of peace. There is one message, the message of Ahimsa. Ahimsa is a supreme duty of man. ...read more.

Gandhi's encouragement of non-violence, known as Ahimsa was the expression of a way of life in the Hindu religion. By the Indian practice of non-violence Britain too would eventually consider violence useless and would leave India. The Indian population however could not grasp Ahimsa. A series of armed revolts against Britain broke out, leading to such violence that Gandhi confessed the Shivratri. Gandhi failure if the civil-disobedience campaign he had called, and ended it. The British government again detained and imprisoned him in 1922. Gandhi's death was regarded as an international catastrophe. His place in humanity was measured not in terms of the 20th century but in terms of History. Religious violence soon decreased in India and Pakistan, and the teachings of Gandhi came to inspire non-violent movements forever. Gandhi used non-violence not only at the individual level but also on the social level for abolition of untouchability and non-co operation. He firmly believed that non-violence must be lived in day-to-day life. Gandhi worshiped God through the service of man and looked upon all human beings as the manifestations of God himself. In Gandhi's view when a situation arose where nobody would practice ahimsa, as he understood it, violence, as always was preferable to cowardice. As he has so often explained before, nonviolence could not be taught to a person who feared to die and had no power of resistance. After 21 years in South Africa Gandhi returned to India to fight for Indian independence from Great Britain. ...read more.

I agree with the above quotation I feel that non-violence should be maintained all the time because I feel that it is important for people not to lose their tempers, no matter what situation they may come across in life. Without Ahimsa it would be impossible for humans to exist. Without Ahimsa we would all continue to have endless wars that would eventually lead to extinction. There are other means and ways of solving problems without using the means of violence, for example instead of hitting someone to try and resolve a matter a form of negotiation could be used instead. An example of a person who believed that Ahimsa was wrong was Mahatma Gandhi, his struggle for independence in India included the best traditions of Ahimsa and brought Ahimsa into the main stream of Indian society. Although Ahimsa should be practiced most of the time, there are also times when Ahimsa can not be practiced for certain reasons, it is not possible to practice Ahimsa in all situations a person comes across in life. For example, if you are going to be attacked then self-defense must be used in order to protect ones-self therefore the principle of Ahimsa will be temporarily not in use. Personally I think that if "The principle of Ahimsa is Hinduisms greatest gift to the world." Doesn't this imply that other religions do not teach the principle of non-violence? I feel that all religions in one way or another teach non-violence. I feel that Ahimsa is a great gift to the world, but it is not only Hinduism that promotes Ahimsa it is all religions. ...read more.