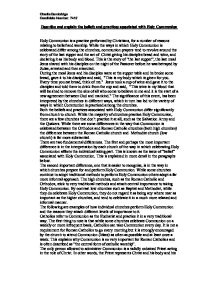 Describe and explain the beliefs and practices associated with Holy Communion Holy Communion is a practice performed by Christians, for a number of reasons relating to belief and worship. While the ways in which Holy Communion is celebrated differ among the churches, communion prayers tend to revolve around the story of the last supper and the act of Christ giving his disciples bread and wine, and declaring it as his body and blood. This is the story of "the last supper", the last meal Jesus shared with his disciples on the night of the Passover before he was betrayed by Judas, arrested and then executed. During the meal Jesus and his disciples were at the supper table and he broke some bread, gave it to his disciples and said, "This is my body which is given for you. Every time you eat bread, think of me." Jesus took a cup of wine and gave it to the disciples and told them to drink from the cup and said, "This wine is my blood that will be shed to remove the sins of all who come to believe in me and it is the start of a new agreement between God and mankind." The significance of this event, has been interpreted by the churches in different ways, which in turn has led to the variety of ways in which Communion is practiced among the churches. ...read more.

In other words, the Priest represents Christ and his body and his blood are represented by wafers made from wheat (called the host) and wine made from grapes. Catholics believe that the Holy Spirit is contained within the wafers and the wine and that in the act of receiving communion the congregation is taking in the Holy Spirit. It is therefore central to the Catholic faith, so much so that they believe that by taking communion they are taking in the strength of the Holy Spirit which will help them lead a life free of sin. The quotation from John 6:53 sums up the overall belief held by Roman Catholics "In Communion, we are eating the True Body and Blood of Jesus Christ, without which "you shall not have life in you". Their interpretation of the story of the bread and wine is very literal. Communion can only be taken by those who have been baptised into the Catholic faith and have taken their First Holy Communion. This usually happens around the age of 7 or 8. The traditional Catholic church service (mass) follows a set format (liturgy) and concludes with the taking of Communion. During Communion wafers are used instead of bread, fermented wine is used which is taken from a shared chalice. The priest holds up the wafer as he says, "the body of Christ" and hands it over to the person receiving communion at which point this person would say, "Amen". ...read more.

Any bread left over is given away and any unfermented wine or fruit juice is returned to the bottle. It is clear to see that from the differences in practice, the lower churches believe Communion to be less important. For example, the fact that they return the wine or juice to the bottle shows that they do not believe it to be the blood of Christ, as otherwise they would treat it with higher respect. Methodists also receive communion in a less traditional way but they do have a main service while taking Communion and an ordained minister is necessary. They also would have to go up to the table to receive The Lord's Supper and do not all drink at the same time. Other churches, such as the Church of England would celebrate Communion, or as it is known in the Church of England, Eucharist, in an almost identical way to the Roman Catholic church, the only differences being that they use both an altar and a table and they may also use bread instead of wafers. This almost identically shared practice displays almost identical beliefs shared by both members of the churches regarding communion. Christians that do not have a specific building in which to worship and attend communion often practice their religion at home alone or with others in what is called a house church. The practices will remain roughly the same from house to house, due to a lack of an altar or ordained minister, but the beliefs will vary depending on the individual receiving Communion. Charlie Bambridge Candidate Number: 7412 ...read more.