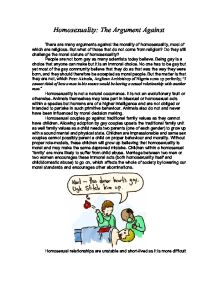 Homosexuality: The Argument Against

Homosexuality: The Argument Against There are many arguments against the morality of homosexuality, most of which are religious. But what of those that do not come from religion? Do they still challenge the moral stature of homosexuality? People are not born gay as many scientists today believe. Being gay is a choice that anyone can make but it is an immoral choice. No one has to be gay but yet most of the gay community believe that they do as that was the way they were born, and they should therefore be accepted as moral people. But the matter is that they are not, which Peter Akinola, Anglican Archbishop of Nigeria sums up perfectly; "I cannot think of how a man in his senses would be having a sexual relationship with another man." ...read more.

Without proper role-models, these children will grow up believing that homosexuality is moral and may make the same depraved mistake. Children within a homosexual 'family' are more likely to suffer from child abuse. Marriage between two men or two women encourages these immoral acts (both homosexuality itself and child/domestic abuse) to go on, which affects the whole of society by lowering our moral standards and encourages other abominations. Homosexual relationships are unstable and short-lived as it is more difficult to connect with a member of the same sex on a romantic level then it is with the opposite sex. Domestic violence is most common among gay couples because of this inability to connect emotionally or romantically. ...read more.

For example, having a child out of wedlock is deemed by some people as immoral and sinful but yet for others, it is perfectly acceptable. The nature argument is also invalid. Homosexuality is evident in the animal kingdom but animals do not decide our morals because if they did, many things deemed immoral (not just homosexuality) would be part of everyday life and acceptable. Many of the arguments against homosexuality seem to consist of this pattern, making sense only if you look at half the evidence backing the argument. For example, the AIDS argument invalid as gay sex only responsible for 5-10% of HIV+ people whereas heterosexual sex is responsible for approximately 60-70% (according to Avert). Those opposing gay rights take the parts of the facts they like and spread these false stereotypes. ...read more.