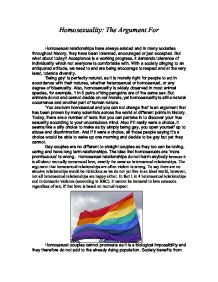 Homosexuality: The Argument For

Homosexuality: The Argument For Homosexual relationships have always existed and in many societies throughout history, they have been tolerated, encouraged or just accepted. But what about today? Acceptance is a working progress, it demands tolerance of individuality which not everyone is comfortable with. With a society clinging to an antiquated attitude, we need to and are being encourage to respect and at the very least, tolerate diversity. 'Being gay' is perfectly natural, as it is morally right for people to act in accordance with their natures, whether heterosexual or homosexual, or any degree of bisexuality. Also, homosexuality is widely observed in most animal species, for example, 1 in 5 pairs of king penguins are of the same sex. But animals do not and cannot decide on our morals, yet homosexuality is still a natural occurrence and another part of human nature. ...read more.

The argument that homosexual relationships are often violent is wrong. To say there are no abusive relationships would be ridiculous as we do not yet live in an ideal world, however, not all heterosexual relationships are happy either. In fact 1 in 4 heterosexual relationships end in domestic violence (according to BBC). It cannot be immoral to love someone regardless of sex, if that love is based on mutual respect. Homosexual couples cannot procreate as it is a biological impossibility and they therefore do not add to the already rising population. Society benefits from homosexuals because of this. "But if the whole world was gay, there would be no society!" opponents cry. As already stated, the chances of such a phenomena are extremely unlikely. Homosexual couples who adopt can be very loving parents and are not any more likely to be child abusers than another adopting heterosexual couple. ...read more.

Homosexuality is just another part of human nature and it seems that even the animal kingdom has diversity when it comes to sexuality. It is such a natural thing to create or desire to create a relationship with whom you fall for, no matter their gender. Relate homosexuality to hair colour, you can be born naturally brunette and you can not change that. You can dye your hair to cover it up but you will always be a natural brunette. Homosexuality is the same. You can cover it up however you like, but you will always be gay. Like hair colour and race, homosexuality is just another category in which some people live under and is therefore perfectly normal and moral to them. I also believe that we are born to be bisexual and that it is environmental and social factors that determine wither the individual does, in fact become homosexual, heterosexual or remains bisexual. ...read more.