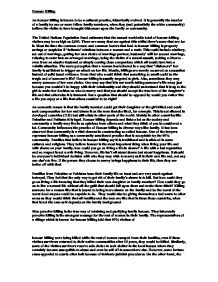 Honour Killing An honour killing is known to be a cultural practice, historically evolved. It is generally the murder of a family by one or more fellow family members, when they (and potentially the wider community) believe the victim to have brought dishonour upon the family or community. The United Nations Population Fund estimates that the annual worldwide total of honour-killing victims may be as high as 5,000. There are many that are against this whilst there's some that are for it. Most the time the common excuse and common factors that lead to honour killing is property savings or suspicion if 'intimate' relations between a woman and a male. This could include adultery, sex out of marriage, getting her own choice of marriage partner, husbands' will for second marriage, refusing to enter into an arranged marriage, being the victim of a sexual assault, seeking a divorce - even from an abusive husband or simply coming close companions which all would turn into a volatile situation. The mere perception that a woman has behaved in a way that "dishonors" her family is sufficient to trigger an attack on her life. Mostly, killings are merely occurred on accusation instead of solid based evidence. From that who would think that something so small could be the tragic end of someone's life? ...read more.

Families from Palestine or Pakistan base their family life on trust and are very much against betrayal. They feel that the only way to get rid of their family's shame is to kill. But how could they go on living a life knowing that they killed their own daughter or family member? How could they go on to live a normal life without all the guilt that should fall upon them and make them think? Killing someone for a reason like that is bound to bring more shame on the family and be the worst of the worst deed anyone could be capable to do. They would also be giving themselves a bad name to other areas as they would think that all families and the men are like that in these those countries, when that is not the case as it depends on the family background. Men perceive killing is the true way of retaining and purifying family honour. They inherently perceive killing is the strongest message for the rest of women in their family. The representatives of a village which is known for honour killing told that 90% victims of honour killing were being killed while the rest of women escaped from their families, even if these victims survivors returned to their native communities after 20 years, they would be killed. ...read more.

Data indicated from research was from newspaper reported cases in 2004 for methods used for honour killing. It shows that mostly women are killed through gunshot (800) which is perceived the easiest method of killing. Sometime men also use axe in killing women (170), while flogging (66), stabbing (82) and other killing methods were rarely used. The motive behind the killing of women was not to hold power but to get rid of taunting and pressure exerted by the surroundings. They kill women in order to stop gossip about female family members, and avoid having fingers raised against their family so they feel that it is only for her benefit. In some cases, mothers have been observed a part of planning in killing her daughter but mostly she seems supportive to her daughter. Mother as feminist entity, has been viewed as helpless in the culturally constructed masculine structure. Even in some cases, mother was also killed while supporting her daughter. Parents are rarely involved in killing their daughter whereas husbands, brothers and in laws have been observed as killers in majority cases. From a research carried out by government in Palestine; statistics show that 91% are male that kill and 69% shows that it is the actual relative that kill whilst the other is said to be anonymous as family may set up other people to do it instead. Overall, I feel that honour killing cannot be justified as it takes away rights and is not fair. ...read more.