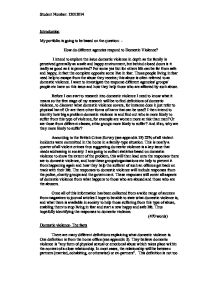 How do different agencies respond to Domestic Violence?

Introduction My portfolio is going to be based on the question: - How do different agencies respond to Domestic Violence? I intend to explore the issue domestic violence in depth as the family is perceived generally as a safe and happy environment, but behind closed doors is it really as good as it is perceived? For some yes but for others life can be far from safe and happy, in fact the complete opposite some live in fear. Those people living in fear need help to escape from the abuse they receive; this abuse is often referred to as domestic violence. I want to investigate the response different agencies/ groups/ people etc have on this issue and how they help those who are affected by such abuse. Before I can start to research into domestic violence I need to know what it means so the first stage of my research will be to find definitions of domestic violence, to discover what domestic violence covers, for instance does it just refer to physical harm? Or are there other forms of harm that can be used? I then intend to identity how big a problem domestic violence is and find out who is more likely to suffer from this type of violence, for example are women more at risk than men? Or are those from different classes, ethic groups more likely to suffer? And if so, why are they more likely to suffer? According to the British Crime Survey (see appendix 18) 22% of all violent incidents were committed in the home in a family-type situation. This is nearly a quarter of all violent crimes thus suggesting domestic violence is a key issue that needs addressing in society. ...read more.

Though if police do find those guilty of abusing their partner they can be sent to jail or at least those who are abused can get restraining orders which restricts the abusers from seeing or going near the person who has been abused. This allows the victim of domestic violence freedom from her attacker to start a new life with protection from the police, if the abuser breaks his restriction it can result in him/her being sent to prison (see appendix 12). Charities response to domestic violence Women's Aid is perhaps the most dominate charity group, which helps women who have suffered from domestic violence. Women's aid has been running for over 30 years their work involves campaigning and developing new responses to domestic violence. The charity offers support and a place of safety for abused women and children by providing refuge and other services. It also raises awareness to emphasis the impact of domestic violence in society and promotes policies and practices to prevent domestic violence. A staggering 54,000 women and children stay in the refuges provided and in 2001 over 64,000 individuals called the women's help-line for help and support. Women's Aid policy is basically they will continue running their charity until every woman and every child is safe. They work closely with the police a response I have already looked into. The charity has made a significant contribution to various ACPO (Association of Chief Police officers) initiatives that aim to better protect victims and hold perpetrators to account. This close working relationship provides more safety for those victims who are seeking for help (see appendix 24). ...read more.

This is something I would have furthered if I had the time and the opportunity to expand my portfolio. I have learnt plenty whilst researching into domestic violence and was unaware as to how much information there is actually on the subject. Whilst working on the project I have become aware of how little I know about domestic violence and the extent of it, which is occurring in society. According to the BCS domestic violence made up 22% (see appendix 18) of all violent crimes this is already a staggering figure but most of domestic violence cases go unreported, thus the extent of domestic violence is much greater and needs to be addressed. All of the responses help the women who have been abused but why is it that it is still seen to some as acceptable? Domestic violence is not acceptable under any circumstances and I believe that it is still very much seen as accepted by many people in society. This view must be altered by the government cracking down on domestic violence and trying to prevent it as well as protecting those who suffer, it is prevented there would be no need to protect anyone. My portfolio has been separated into sections on different responses I feel this is the best way to do it as it gives a clear view of what each response feels if I had written about each response all together I believe it would have got muddled and lost its focus. The way I have processed the project has enabled me to answer my set question. My portfolio identifies that the family is not always safe and that in some cases the family can be the most harmful aspect of their lives, and I have identified the key responses to domestic violence. ...read more.