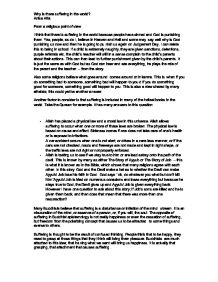 How do Religious People View Suffering in the World?

From a religious point of view I think that there is suffering in the world because people have sinned and God is punishing them. Yes, people, as do I, believe in Heaven and Hell and some may say well why is God punishing us now and then he is going to punish us again on Judgement Day, I can relate this to being in school. If a child is extremely naughty, they are given sanctions, detentions, purple referrals etc, the child's teacher will still in a sense complain to the child's parents about their actions. This can then lead to further punishment given by the child's parents. It is just the same as with God but as God can hear and see everything, he plays the role of the parent and the teacher - from the story. Also some religions believe what goes around comes around or in karma. This is when if you do something bad to someone, something bad will happen to you d if you do something good for someone, something good will happen to you. ...read more.

This is known by many as either The Story of Ayyub or The Story of Job - this is what it is known as in the Bible, which shows that many religions agree with each other. In this story God and the Devil make a bet as to whether the Devil can make Ayyub/ Job lose his faith in God. God says ' ok, do whatever you what but don't kill him.'Ayyub/ Job is tried on numerous occasions and loses everything but because he stays true to God, the Devil gives up and Ayyub/ Job is given everything back. However I have one question to ask about this story; if Job's sons are killed and he is given them back, and then does that mean that there was more than one resurrection? Many Buddhists believe that suffering is a disturbance or irritation of the mind stream. It is an obscuration of the mind, or essence of a person, or, if you will, the soul. ...read more.

Other type of suffering such as kidnap and rape etc are still caused by certain people's choices. A person still goes and chooses to these things - even if that person is mentally ill, which is why they did something, the reason for their illness may be due to their mother's choices whilst they were in the womb. If there mother chose to smoke then this could have led to the mental illness Many atheists share the view that there is so much suffering in the world, such as war, rape etc, wouldn't God want to help these people rather than making them suffer. So then atheists feel that the reason that there is suffering is because there is no God therefore there is no one to help. A thing such as family being split up or a tragic death can lead to an agnostic person becoming an atheist. So basically they feel that there is suffering because there is no God. ?? ?? ?? ?? Why is there suffering in the world? Anisa Atta ...read more.