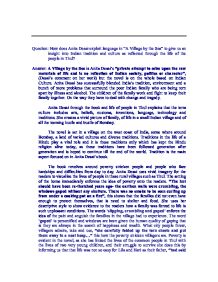 How does Anita Desai exploit language in &quot;A Village by the Sea&quot; to give us an insight into Indian tradition and culture as reflected through the life of the people in Thul?

Question: How does Anita Desai exploit language in "A Village by the Sea" to give us an insight into Indian tradition and culture as reflected through the life of the people in Thul? Answer: A Village by the Sea is Anita Desai's "private attempt to seize upon the raw materials of life and is no reflection of Indian society, politics or character", (Desai's comment on her work) but the novel is on the whole based on Indian Culture. Anita Desai has successfully blended India's tradition, environment and a bunch of more problems that surround the poor Indian family who are being torn apart by illness and alcohol. The children of the family work and fight to keep their family together. On the way they have to deal with change and tragedy. Anita Desai through the book and life of people in Thul explains that the term culture includes arts, beliefs, customs, inventions, language, technology and traditions. She creates a vivid picture of family, of life in a small Indian village and of all the teeming hustle and bustle of Bombay. The novel is set in a village on the west coast of India, some where around Bombay, a land of varied cultures and diverse traditions. Traditions in the life of a Hindu play a vital role and it is these traditions only which has kept the Hindu religion alive today, as these traditions have been followed generation after generation and is hoped to continue till the end of the world. ...read more.

The words said by Hari "only boy in the village with no boat" prove the fact that each and every person was involved in fishing as a source of survival. Even though Hari didn't have any work to do he earns a living in a variety of ways. "It was true he had done nothing but dig, sow and break coconuts from the trees and drag nets in the sea." This line tells us about how Hari's life at twelve was a contrast to those who live in the city. In the novel, the role of people and their importance of existence is given great significance as it is these people who benefit the village in everyway possible. The village was based on a male dominate way or living. It was the man who was the head of the family who has the soul right to dominate and control. On the other hand the women were very submissive towards their husbands and this is proved through the statement- "No one dared to tell him, least of all their mother." This also proves that the women were not able to stand up against the men and had no means of power or control over anything. They were basically portrayed delicate and afraid of risking an argument with the men. The women didn't work for the household income as it was the work of the men to do so, so the women kept themselves busy in the house work or other sorts of pass time such as- "sit outside on a string bed outside her house, competently chopping up a heap of betel nuts" Buying fish and picking barnacles, and mollusks is said to be the, "occupation of the women." ...read more.

In Spite of their poverty, the villagers celebrate festivals such as Diwali with a lot of splendor and showiness. "Every house in the village was decorated with fresh garlands of mango leaves and marigolds", this line tells us how much importance was given to flowers and plants in the Hindu customs. Desai has introduced different elements of nature at regular intervals through out the novel. This festival is once again associated with lights, and color , which is why it brings gusto in the dry lives of the villagers. The air of festivity floods the village as and when women make colorful designs called, "rangolis" and hang paper lanterns. "Its streamers rustle in the wind", her descriptive style helps the reader to understand her ideas better, and the idea of Diwali is automatically thought about as an event of great joy and happiness. Oil lamps are lit, and fireworks are lit in order to welcome the Goddess, Laxmi. Sweets and prepared, some being, "jalebis", and many other ones. These are the ways in which the children celebrate Diwali. The fireworks are described so beautifully, and the image of a fountain of "gold and silver" sounds heavenly, and once again emphasizes on the cheerfulness of the occasion. The movement of some of these fireworks is made very vivid in phrases such as, "it whirled around dizzily" and the launching of rockets are compared to a "comet", which "bang into a cloud of stars." Laxmi is considered to be the Goddess of wealth, it is said that she visits every home on Diwali. Idols of Laxmi , and Ganesha are bought and decorated in every household on this day. ...read more.