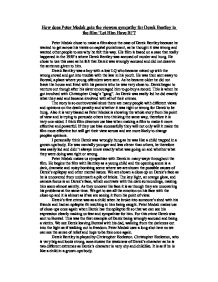 How does Peter Medak gain the viewers sympathy for Derek Bentley in the film 'Let Him Have It!'?

How does Peter Medak gain the viewers sympathy for Derek Bentley in the film 'Let Him Have It!'? Peter Medak chose to make a film about the case of Derek Bentley because he wanted to get across his views on capital punishment, as he thought it was wrong and wanted other people to see why he felt this way. His film is based on a case that really happened in the 1950's where Derek Bentley was accused of murder and hung. He chose to use this case as he felt that Derek was wrongly accused and did not deserve the sentence given to him. Derek Bentley was a boy with a low I.Q who became mixed up with the wrong crowd and got into trouble with the law in his youth. He was then sent away to Borstal, a place where young offenders were sent. As he became older he did not leave the house and lived with his parents who he was very close to. Derek began to venture out though after his sister encouraged him to go buy a record. This is when he got involved with Christopher Craig's "gang". ...read more.

They show that Derek is shy, lonely and influenced greatly by his parents and that Christopher is rebellious, bold and confident. Paul Reynolds, who plays Christopher Craig, is a great contrast to Christopher Eccleston, who plays Derek Bentley. Paul Reynolds is quite small and childish/cheeky compared to Christopher Eccleston who is big and strong looking. Craig brings Bentley into the rest of his 'gang', which all dress and speak similarly to Craig. We begin to see a slight change in Derek's character after he begins to spend time with the 'gang'. He begins to dress differently and gets a new haircut yet he still looks different from the other gang members as he wears a baby blue coat, symbolising youth, and everyone else is wearing black. This is as if to say Derek will always be different from everyone else. Derek looks out of place, as though he is trying to fit in with these people. Also Derek becomes more confident and out-going as he spends more time with Chris's gang. Lighting is used symbolically when Derek is talking from his bedroom window to Chris. Derek is in the light symbolising the safeness of his own home behind him and Chris is out in the dark representing the dangers outside with Craig. ...read more.

Derek is taken along the corridor. As he goes he stumbles and we see it from his point of view as they put the bag over his head. The execution is very quick and shocking, showing how brutal and undignified the death penalty is. We see the trapdoor be opened and see Derek fall to his death. Peter Medak then uses a very effective use of light and camera travelling up showing you the full length of Derek and then going up into the ceiling. This is as if we are following Derek's spirit up into heaven. The final shot of the film begins with a long shot of Derek's street, showing us where it all began. The camera then gives us a point-of-view shot, walking us through Derek's house, once again as though we are Derek's spirit, through to where his family are all hugging and crying. I feel that this film was very effective and was trying to get across the negative side of capital punishment. I think Peter Medak is successful in delivering this message as it makes you feel sympathy towards Derek for being wrongfully accused and makes you think of how many other people have been killed wrongfully. It is a very bias film though considering it only shows you the bad/wrong side of capital punishment. ...read more.