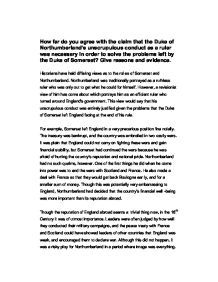 How far do you agree with the claim that the Duke of Northumberland&amp;#146;s unscrupulous conduct as a ruler was necessary in order to solve the problems left by the Duke of Somerset? Give reasons and evidence.

How far do you agree with the claim that the Duke of Northumberland's unscrupulous conduct as a ruler was necessary in order to solve the problems left by the Duke of Somerset? Give reasons and evidence. Historians have held differing views as to the roles of Somerset and Northumberland. Northumberland was traditionally portrayed as a ruthless ruler who was only out to get what he could for himself. However, a revisionist view of him has come about which portrays him as an efficient ruler who turned around England's government. This view would say that his unscrupulous conduct was entirely justified given the problems that the Duke of Somerset left England facing at the end of his rule. For example, Somerset left England in a very precarious position financially. The treasury was bankrupt, and the country was embroiled in two costly wars. It was plain that England could not carry on fighting these wars and gain financial stability, but Somerset had continued the wars because he was afraid of hurting the country's reputation and national pride. Northumberland had no such qualms, however. One of the first things he did when he came into power was to end the wars with Scotland and France. ...read more.

Bishops Ridley and Hooper were able to greatly strengthen Northumberland's religious grip on the country, but at the cost of a definite swing towards Calvinism. This was dangerous for England in more ways than one. Firstly, it could cause rebellions, especially in the North where Protestantism was not very popular. Kett's Rebellion and the Prayer Book Rebellion during Somerset's rule had been brought about because of displeasure over religious reforms. Fortunately for Northumberland though, there were no rebellions about his religious reforms, which included a new and even more Protestant prayer book. This was possibly due to fear over the way Northumberland had dealt with Kett's rebellion earlier. The second danger in adopting a more Calvinist outlook was that Northumberland risked displeasing Charles V, ruler of the Holy Roman Empire. Charles V was a staunch Catholic, and also the ruler of the most powerful country in Europe. He would be opposed to any country who was becoming more Protestant - and doubly so with England, because she had just adopted a neutral stance with France, who was almost constantly at war with the Empire. The question is whether Northumberland was justified in exposing England to these risks. ...read more.

This was very unscrupulous behaviour on the part of Northumberland - perverting the succession was akin to treason. Many would argue that this action was entirely unjustified, and Northumberland was acting in his own interests here rather than in the interests of the country. However, a case can still be made in his defence. Northumberland believed, correctly, that he was an extremely adept ruler. If Mary was to come to the throne, there was no guarantee that she would be able to keep the country in order, and there was the possibility of Northumberland's work going to waste. There was an even greater danger that Mary would try to convert the country back to Catholicism - this could lead to riots, which would damage the financial and social stability of the country. I can conclude then that Northumberland was justified in carrying on with his unscrupulous conduct, as he needed to correct the errors left by Somerset's government. Though he may have made losses in the short term, in the long term he was able to completely turn England around through his 'unscrupulous' methods. The only area in which he was not entirely justified was in trying to pervert the succession, but even then he had reasons which could be seen as legitimate. ...read more.