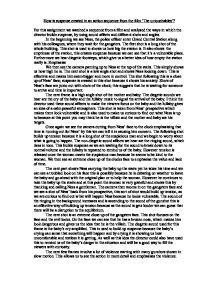 How is suspense created in an action sequence from the film 'The untouchables'? For this assignment we watched a sequence from a film and analysed the ways in which the director builds suspense, by using sound affects and different shots and angles. In the beginning we see Ness, the police officer enter Grand Central Station along with his colleagues, where they wait for the gangsters. The first shot is a long shot of the whole building. This shot is used to shows us how big the station is. It also shows the emptiness of the station, this creates suspense because we can see that it's a vulnerable place. Furthermore we hear diegetic footsteps, which give us a better idea of how empty the station really is. Emphasise We then see the camera panning up to Ness at the top of the stairs. This simply shows us how high he is. The next shot is a low angle shot and shows Ness looking down. ...read more.

However tension is released once the woman meets the suspicious man because he seems to be kind to the woman. We then see an extreme close up of the clocks face to emphasise the value and lack of time. The next part shows Ness carrying the baby up the stairs yet he takes his time and we can see a troubled look on his face this is possibly because he is debating on weather to leave the baby and go ahead with the original plan or to help the woman. However he continues to take the baby up the stairs and at this point the woman is very grateful and shows this by thanking and calling Ness a gentleman. The camera then zooms in on the gangsters face and we see a shot of Ness' back from his prospective, this sort of shot would build up tension, as we are curious to find out what will happen Ness because he looks vulnerable. ...read more.

The next shot we see is a medium shot of the mothers' soundless scream. For this shot we can argue as to whether it's effective of not. We can imagine how devastated she's feeling therefore the need of sound is not so important because her facial expressions and actions say it all. However people may think it doesn't draw as much attention as it should because there's no sound to emphasise her feelings so it could be improved by slowing down everything else and keeping a silent background while the mothers screams. The final shot of the drama is another medium shot of Ness being the hero by catching the pram followed by a close up of the baby's face to release tension and reassure viewers that it is safe. I think the sequence ended quite well because there a good uses of camera shots to build up the tension and we see a happy ending to release tension. By Hasina Sarwari ...read more.