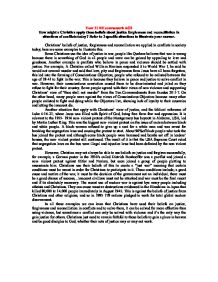 How might a Christian apply these beliefs about justice forgiveness and reconciliation in situations of conflicts today? Refer to 2 specific situations to illustrate your answer.

Year 11 RE coursework AO2 How might a Christian apply these beliefs about justice forgiveness and reconciliation in situations of conflicts today? Refer to 2 specific situations to illustrate your answer. Christians' beliefs of justice, forgiveness and reconciliation are applied in conflicts in society today; here are some examples to illustrate this. Some Christians use the idea of justice in war, people like Quakers believes that war is wrong because there is something of God in all people and more can be gained by appealing to love and goodness. Another example is pacifists who believe in peace and violence should be settled with justice. For example, A Christian called William Harrison responded it to World War I, he said he would not commit murder and said that love, pity and forgiveness from Jesus have all been forgotten, ...read more.

Another situation that apply with Christians' view of justice, and the biblical reference of Luke 4:16-21, where Jesus was filled with Spirit of God, being free from fear and oppression. It is relevant to the 1955- 1956 non- violent protest of the Montgomery bus boycott in Alabama, USA, led by Martin Luther King. This was the biggest non- violent protest on the issue of racism between black and white people. A black woman refused to give up a seat for a white man and was arrest for breaking the segregation laws and causing the protest to start. About 90%of black people who took the bus joined the protest and although some black people were harassed and bombs set off in leaders' houses, the non- violent protest still continued. ...read more.

The recent use of nuclear war is against bye many people including atheists and Christians. They can cause massive destructions evidenced in the Hiroshima in Japan that killed 80,000 to 14,000 people immediately in August 1945. This is against the beliefs of justice from Christians and other religions, and so in 1995 178 nations pledged to work for total global nuclear disarmament. In all these examples we can learn that Christians have used their beliefs on justice, forgiveness and reconciliation in conflicts and to solve them, it can be solved far more effective than using violence, but sometimes a conflict can only be solved with violence and it's the only way the gain justice for others. Christians just need to remain faithful to those beliefs to gain a place in heaven and be good disciples to God, whether their acts of justice may or may not work. ...read more.