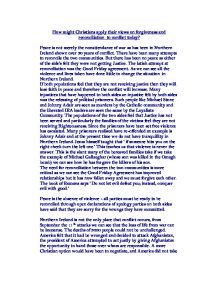 How might Christians apply their views on forgiveness and reconciliation to conflict today?

How might Christians apply their views on forgiveness and reconciliation to conflict today? Peace is not merely the nonattendance of war as has been in Northern Ireland shown over 30 years of conflict. There have been many attempts to reconcile the two communities. But there has been no peace as either of the side's felt they were not getting Justice. The latish attempt at reconciliation was the Good Friday agreement. As we can see all the violence and lives taken have done little to change the situation in Northern Ireland. If both populations feel that they are not receiving justice then they will lose faith in peace and therefore the conflict will increase. Many injustices that have happened to both sides an injustice felt by both sides was the releasing of political prisoners. Such people like Michael Stone and Johnny Adair are seen as murders by the Catholic community and the liberated IRA leaders are seen the same by the Loyalists Community. ...read more.

Peace is the absence of violence - all parties must be ready to be reconciled through open declarations of apology parties on both sides have said that they are sorry for the wrongs they have committed. Northern Ireland is not the only place that conflict occurs, from September the 11th attacks we can see that the loss of life from war can be immense. The deaths of 3000 people could not be unchallenged. America felt that it had be wronged and decided to attack Afghanistan, the president of America attempted to act justly by giving Afghanistan the opportunity to hand those over whom are responsible. A more Christian option would have been to negotiate, and America did not take the option to forgive. The teachings of Jesus were not followed to be reconciled we must be peace with God aswell as our enemies. Jesus said that ' you have heard it said love friend hate your enemies but I tell you to pray for your enemies and pray for those who persecute you. ...read more.

As Catholics we can sympathise with the situation but equally as Catholics we cannot condone the actions that have been taken and their consequences. As we can see all the violence and lives taken have done little to change the situation in Northern Ireland. The possibility is that if there was no violence and conflict at all and this was replaced with negotiations and compromises on both sides, then it is likely things would be in a healthier state than they are now. I know this has obviously been tried, though clearly not kept or pursued. As Catholic people, they should not resort to any means of violence as it evidently goes against the teachings of Jesus, even if they feel they are in the right. There have been many conflicts in history - these can not have been overcome with reconciliation or forgiveness. Basel Hume once said "we must look at ourselves and our lifestyles"; this highlights our duty as Christians to always be open o forgiveness 'We must forgive 70 times 7 ' was once said by Jesus we must also take this view on life. ...read more.