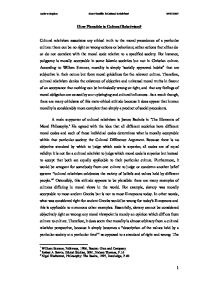 How Plausible is Cultural Relativism

How Plausible is Cultural Relativism? Cultural relativism associates any ethical truth to the moral precedence of a particular culture: there can be no right or wrong actions or behaviour; rather actions that either do or do not correlate with the moral code relative to a specified society. For instance, polygamy is morally acceptable in some Islamic societies but not in Christian culture. According to William Sumner, morality is simply 'socially approved habits'1 that are subjective in their nature but form moral guidelines for the relevant culture. Therefore, cultural relativism denies the existence of objective and universal moral truths in favour of an acceptance that nothing can be intrinsically wrong or right, and that any feelings of moral obligation are caused by our upbringing and cultural influences. As a result though, there are many criticisms of this meta-ethical attitude because it does appear that human morality is considerably more complex than simply a product of social precedents. A main supporter of cultural relativism is James Rachels in 'The Elements of Moral Philosophy.' He agreed with the idea that all different societies have different moral codes and each of these individual codes determines what is morally acceptable within that particular society: the Cultural Difference Argument. ...read more.

On the other hand though, Kant believed that "human beings are not capable of direct, unmediated knowledge of the world"5 and if this were the case, then any argument for an inbuilt moral awareness within humans is crushed. Rachels also implies that the moral code of any given society is infallible due to the absence of objective truths or standards. According to this view, if a culture allowed slavery again, people from different cultures would have no grounds to oppose it because they should respect cultural differences. However, whilst social tolerance is vital, it is also important to scrutinise moral codes of other cultures in order to improve morality among humans as a whole. Added to this though is the problem of ethnocentrism: a natural human bias which places "one's own group... [at the]...centre of everything."6 Therefore, to impartially scrutinise another culture is an almost impossible task, because we are unable to judge an act purely on its merits due to our subconscious, culturally influenced, moral ideas. The absence of any form of objective moral standards means that moral inferiority cannot exist, thus implying that Nazi ideologies are as morally acceptable as Buddhist beliefs. ...read more.

The theory interprets any act to be ultimately motivated by a desire to do what we want in order to make us feel good. However, one could argue that the satisfaction that comes from doing a morally good act is merely a bi-product as opposed to being the reason for carrying out the act. Nevertheless, psychological egoism is irrefutable because it is based on speculation. This, though, does not make it any more plausible. Overall, it is evident that the main question surrounding moral philosophy concerns what inspires us to do, or at least be aware of, 'goodness.' The argument of cultural relativism is strong because different cultures clearly do have different moral outlooks. However, it does seem to be a much too narrow and simplistic view to attribute all morality to cultural 'habits'. Whilst I would disagree with the existence of objective universal truths, we appear to have an intuitive awareness of what is good which "engages us to pay [regard] to the interests of mankind and society"9. Essentially therefore, cultural relativism is a plausible theory because the influences of society do have a role to play when we make moral decisions. However, the natural moral intuition within humans appears to be the most important factor in moral decisions. ...read more.