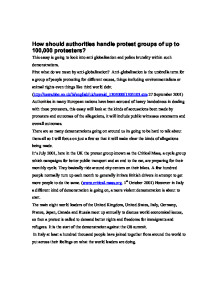 How should authorities handle protest groups of up to 100,000 protesters?

How should authorities handle protest groups of up to 100,000 protesters? This essay is going to look into anti globalization and police brutality within such demonstrations. First what do we mean by anti-globalization? Anti-globalization is the umbrella term for a group of people protesting for different causes, things including environmentalism or animal rights even things like third world debt. (http://news.bbc.co.uk/hi/english/uk/newsid_1305000/1305103.stm 27 September 2001) Authorities in many European nations have been accused of heavy handedness in dealing with these protesters, this essay will look at the kinds of accusations been made by protesters and outcomes of the allegations, it will include public witnesses statements and overall outcomes. There are so many demonstrations going on around us its going to be hard to talk about them all so I will focus on just a few so that it will make clear the kinds of allegations being made. It's July 2001, here in the UK the protest group known as the Critical Mass, a cycle group which campaigns for better public transport and an end to the car, are preparing for their monthly cycle. They basically ride around city centers on their bikes. ...read more.

According to Stefano Agnoletto in the witness statement he says that the police seemed to be working with the Black Block organization, he states, "The Black Bloc? They appear and disappear, no one stops them. They attack a youth from Rifondazione, wreck his flag, and beat him. They throw stones at the spokesman of the Genoa Social Forum. They wreck stores, set fire to buildings. Many are armed to the teeth. How on earth they managed to come to Genoa, with soldiers controlling every car?" So it would seem not only are protesters blaming police for the brutality in Italy this year but also other people on demonstration as well. Others would maybe blame the violence on local people, or people who were not demonstrating but who were just there for the violence, we see people like that all the time at football matches, people who go along for the ride. When so many people join together in one place I find it really hard to believe that everybody there is there to just put across his or her point and have a peaceful time. ...read more.

If we were to attend a demonstration here in the United Kingdom we know that police are not going to be armed and ready to shot to kill for smashing a few shop windows. Maybe armed with batons and shields but not taking it as far as shooting at you. Whichever way we look at things we know that police play a large part in keeping us all safe from whatever violence that might occur. Each and every person who takes themselves along to a protest weather for good or bad intentions, should know what kinds of risks they are taking and exactly what charges can be brought upon them, a lot of unlucky people can simply just be in the wrong place at the wrong time. Protesters who are in these kinds of situations who have found themselves battered and bruised or in hospital should really think more about what they are doing and with which kinds of people they are doing it with. When people are getting killed and injured for what they believe in I think that authorities need to take a closer look at what things can be done to keep peace for all of us no matter who we are or where we are from. ...read more.