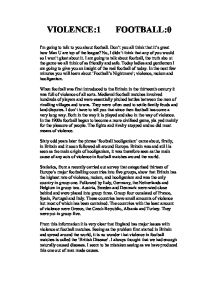 I'm going to talk to you about football. Don't you all think that it's great how Man U are top of the league? No

VIOLENCE:1 FOOTBALL:0 I'm going to talk to you about football. Don't you all think that it's great how Man U are top of the league? No, I didn't think that any of you would so I won't gloat about it. I am going to talk about football, the truth about the game we all think of as friendly and safe. Today ladies and gentlemen I am going to give you an insight of the real football of today. In the next few minutes you will learn about 'Football's Nightmare'; violence, racism and hooliganism. When football was first introduced to the Britain in the thirteenth century it was full of violence of all sorts. Medieval football matches involved hundreds of players and were essentially pitched battles between the men of rivalling villages and towns. They were often used to settle family feuds and land disputes. I don't have to tell you that since then football has come a very long way. Both in the way it is played and also in the way of violence. In the 1900s football began to become a more civilised game, played mainly for the pleasure of people. ...read more.

Examples of the worst cases are fans being jailed for match violence, thirty-four Britons being detained after violence in a world cup match. However I feel that policemen being shot is by far the worst. Most of the evidence on hooligan offenders suggests that they are generally between the ages of 17-27, that they are in manual and lower occupations or, to a lesser extent, unemployed, and that they come from working class backgrounds. Nevertheless I don't consider the background of offenders relevant but only what is going to be done about football hooliganism. I am sure that most of you know that the risk of going to a football much has greatly risen over the last decade, which is why many schemes and programs have been developed to assure safety at matches. How would you feel if you were at a football match and you witnessed a fight, a fire or even a shooting? Can you honestly say that this would not put you off football? I can't. Britain are yet to find a satisfactory method of keeping violence from football matches, however countries like Germany and Belgium have made fan coaching schemes which involve football fans getting help from social workers. ...read more.

However it is clearly a very serious problem and it is often blamed for outbreaks of violence, particularly at international matches. In Britain, racist chanting at football matches still occurs and to end this a campaign has been issued to combat racism. It is called 'Let's kick racism out of football' I was recently at a football match and on the television screens I saw an advert for this campaign. It really made me think because not only was it a very clever commercial but it also got people's attention. I am sure that all of you sitting here today believe that racism is most definitely something that is not needed in football matches but also in the world. I ask you all that whether it is not going too far when the England national team almost got disqualified from the world cup 2002 because of violent behaviour by the English fans. This is not just a match; this is the biggest sporting event in the world. Would this have been fair on England team? Would it have been fair on the non-violent England fans? In my opinion the only fair justice would be to find a cure for the British disease' before it becomes deadly and contagious. Think about! ...read more.