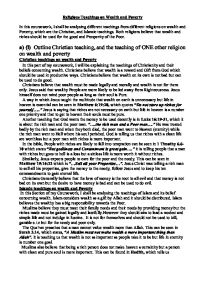 I shall be analysing different teachings from different religions on wealth and Poverty, which are the Christian, and Islamic teachings

Religious Teachings on Wealth and Poverty In this coursework, I shall be analysing different teachings from different religions on wealth and Poverty, which are the Christian, and Islamic teachings. Both religions believe that wealth and riches should be used for the good and Prosperity of the Poor. a) (i) Outline Christian teaching, and the teaching of ONE other religion on wealth and poverty Christian teachings on wealth and Poverty In this part of my coursework, I will be explaining the teachings of Christianity and their beliefs concerning wealth. Christians believe that wealth is a reward and Gift from God which should be used in productive ways. Christians believe that wealth on its own is not bad but can be used to do good. Christians believe that wealth must be made legally and morally and wealth is not for them only. Jesus said that wealthy People are more likely to be led away from Righteousness. Jesus himself does not mind poor people as long as their soul is Pure. A way in which Jesus taught the multitude that wealth on earth is unnecessary but life in heaven is essential can be seen in Matthew 6:19:20, which quotes "Do not store up riches for yourself....." Jesus is saying that riches are not necessary on earth but life in heaven is a number one priority and that to get to heaven their souls must be pure. Another teaching that God wants the money to be used decently is in Luke 16:19-31, which it is about the rich man and the poor man. ...read more.

The world's wealth has been unevenly distributed leaving some people extremely rich and some people just a bit comfortable while the rest of the world live in absolute poverty which means that they cannot afford the necessities of life. Less than 10%of the people in this world are wealthy while about another 25% are comfortable while the rest of the world live in gross poverty. Since the struggle for independence from different colonies from their colonial masters, the newly independent colonies have been faced with one disaster after the other while their former colonial masters turn a blind eye and a deaf ear to it (from the Internet). World poverty has gotten out of control to the extent that countries are now been classified into three main groups mainly: The First world Countries- These are countries that are developed such as U.S.A, U.K and Germany. They are the MEDCs (More Economically developed countries). The Second world Countries- These are countries that are developing such as China and Sweden. They are the EDCs (Economically developing Countries). The Third world countries- These are countries that are underdeveloping such as Pakistan and India. They are the LEDCs (Less economically developing countries). The second and third world countries especially are poor because of a result of either one or a combination of many disasters. Some of which are wars which means two different groups are having a conflict or debt which iscaused by owning other richer countries money which they will be unable to pay. ...read more.

However, some people may disagree with the idea of"There should be no rich people as long as there is poverty". This is because some people are just too lazy to go out to look for work; they would rather stay at home and beg for food from the rich people rather than seizing the opportunity to work. I think that it is wrong because the rich will struggle for the poor to enjoy their sweat by claiming benefits. If the poor people were given the chance to be rich by working, they will refuse and would rather rely on the rich. Although some people will be unable to work due to injury, inflation, which means higher money chasing a few goods or no work available.However there, are people in less developed countries who are born into poverty and cannot get out of the poverty cycle due to droughts, disasters, no tools to work on the land e.t.c. The rich have the right to their wealth as long as they have worked for it because their money is legal so therefore they are entitled to have as much as they want and the poor should be made to work for money legally and stop relying on rich people. In Conclusion, I will like to say that everyone has a right to their own wealth as long as it is legitimate but the rich people should also try to give a 2.5% of their annual earnings according to Zakah to saves lives according to the Islamic teachings. In addition, the poor should endeavour to find lawful ways of making money to sustain them and become useful in our society today. ?? ?? ?? ?? ...read more.