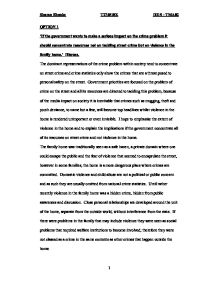 'If the government wants to make a serious impact on the crime problem it should concentrate resources not on tackling street crime but on violence in the family home.' Discuss.

OPTION 1 'If the government wants to make a serious impact on the crime problem it should concentrate resources not on tackling street crime but on violence in the family home.' Discuss. The dominant representations of the crime problem within society tend to concentrate on street crime and crime statistics only show the crimes that are a threat posed to personal safety on the street. Government priorities are focused on the problem of crime on the street and all its resources are directed to tackling this problem, because of the media impact on society it is inevitable that crimes such as mugging, theft and youth deviance, to name but a few, will become top headlines whilst violence in the home is rendered unimportant or even invisible. I hope to emphasise the extent of violence in the home and to explain the implications if the government concentrate all of its resources on street crime and not violence in the home. The family home was traditionally seen as a safe haven, a private domain where one could escape the public and the fear of violence that seemed to encapsulate the street, however in some families, the home is a more dangerous place where crimes are committed. ...read more.

This gender power relation was described by Dobash and Dobash, 1992, p248 (2) "(Domestic) violence is seen as intentional behaviour chosen by men as a tactic or resource associated with attempts to control and dominate women". Our cultural beliefs, social conventions, and major institutions such as law, politics, and religion have all emerged from a tradition that asserts the inherent superiority of men over women; hence the right of men to dominate women. Like all other major social institutions, the law has played a significant role in reflecting and reinforcing gender imbalances in power. With the embedded social constructions of male masculinity which has characteristics of violence. It's a common saying that an abusive father will produce an abusive husband. Since domestic violence is so widespread in our society, and the effect it has on children is complex and long term. Studies show a male child who has grown up seeing his father beat his mother will most likely develop a violent nature and in turn, abuse his wife later in life. In turn, a female child growing up in the same environment who sees her mother putting up with violence will perceive the act as the fate of all women in general and therefore, develop a submissive nature the main characteristics of an abused victim. ...read more.

Sally Merry (6) uses spatial governance to mean the spatial exclusion of batterers from the life space of their victims, by protecting a victim from an abuser by prohibiting them from entering the victim's home or workplace. This just protects the victim after the fact it does not reform or punish the offender. Feminists have reformed the justice system by pushing for TRO's (Temporary Restraining Orders) or injunctions which ordered the abuser from any contact with the victim, although this spatial mechanism was widely used they were only used as an emergency measure and only lasted for a limited amount of time. In conclusion the government spends billions on combating crime on the street and already concentrate most resources on tackling street crime, but the crime problem still escalates. If the government were to concentrate more resources on looking at the family, researching and look at what could be done to implement ways of preventing violence in the home rather than just protecting the victim it may be a step towards reducing violence in the home. To reduce it further society would need to change their attitudes, people would need to be educated to value the family and to enforce public awareness that violence in the family home just as crime on the street will not be tolerated. WORD COUNT: 2201 WORDS Sharon Ebanks T274910X D315 - TMA02 1 ...read more.