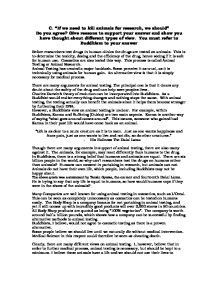 &quot;If we need to kill animals for research, we should Do you agree? Give reasons to support your answer and show you have thought about different types of view. You must refer to Buddhism to your answer

C. "If we need to kill animals for research, we should" Do you agree? Give reasons to support your answer and show you have thought about different types of view. You must refer to Buddhism to your answer Before researchers test drugs in human clinics the drugs are tested on animals. This is to determine the toxicity, dosing and the efficiency of the drug, hence seeing if it is safe for human use. Cosmetics are also tested this way. This process is called Animal Testing or Animal Research. Animal Testing has created a major backlash. Some perceive it as cruel, as it is technically using animals for human gain. ...read more.

"Life is as dear to a mute creature as it is to man. Just as one wants happiness and fears pain, just as one wants to live and not die, so do other creatures." - His Holiness The Dalai Lama Though there are many arguments in support of animal testing, there are also many against it. The animals, for example, may react differently than humans to the drug. In Buddhism, there is a strong belief that humans and animals are equal. There are six billion people in the world, so why can't researchers test the drugs on humans rather than animals? Humans can consent in partaking in research, but animals can not. ...read more.

Buddhists, I believe, would not agree to cosmetic testing as there is a proven alternative. Some people believe we should live until we naturally die without medical intervention. Medical Science in this respect could therefore be seen as cheating death. Clearly, there are many different views on animal testing. I, however, believe that in order to further medical process, animal testing is necessary, but should be kept to a minimum. I believe these animals have a life and we should not use their lives to further our own. The only type of animal testing I completely disagree with is Cosmetic Testing as I feel there is no need for it. The Buddhist faith seems to have similar views as myself. Animal research is evidently a controversial topic, I believe until there has been a breakthrough where animals are not needed for research, it should continue. ...read more.