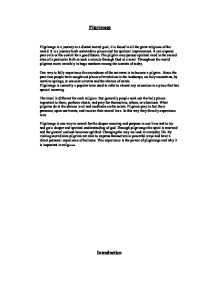 In this coursework I am going to talk about a Christian place of pilgrimage.

Pilgrimage Pilgrimage is a journey to a distant sacred goal, it is found in all the great religions of the world. It is a journey both outwards to places and for spiritual improvement. It can express past evils or the search for a good future. The pilgrim may pursue spiritual need in the sacred sites of a particular faith or seek a miracle through God or a saint. Throughout the world pilgrims move invisibly in huge numbers among the tourists of today. One way to fully experience the sacredness of the universe is to become a pilgrim. Since the past time people have sought out places of revelation in the landscape, on holy mountains, by curative springs, at oracular caverns and the shrines of saints. Pilgrimage is currently a popular term used to refer to almost any excursion to a place that has special meaning. The ritual is different for each religion. But generally people seek out the holy places important to them, perform rituals, and pray for themselves, others, or situations. What pilgrims do at the shrines is sit and meditates on the saints. Pilgrims pray to feel their presence, open our hearts, and receive their sacred love. ...read more.

From there he travelled to neighbouring towns, preaching and teaching the good news of the Kingdom of God. He performed miracles such as: Turning water into wine; healing the sick; restoring the dead to life; Walking on water; Casting demons out of the possessed and turning a few loaves of bread and fish into enough food to feed a crowd of thousands. His followers increased in number, He promised forgiveness and eternal life in heaven to the most sinful, provided their repentance was sincere. This induced the hatred of the Jewish Pharisees, who feared that his teachings might lead to disregard for the authority of the Torah. Despite the Jewish Authorities opposition, Jesus' popularity increased. He was devoted to the Torah, preached radical and in many cases more stringent observance and application of Jewish laws. The people could relate to his teaching in their own understanding of life. For Jesus, God's demand is summed up in the two critical commandments in Judaism upon which everything else rested. To love God means placing God first in one's life. The main thing Jesus taught which was different from his teachers was not only love thy neighbour as yourself but love thy enemy, a selfless service to everyone even to those disregarded by society, and forgiveness is the supreme expression of love. ...read more.

Christian tradition perhaps as early as the second century CE, identified a cave as the site of Jesus' birth. The site of the Nativity is a central pilgrimage destination for Christians from all over the world. Bethlehem was a city of importance to the Crusaders, who conquered it in the year 1100. Over years of wars between the Crusaders and the Muslims the city was destroyed, and then subsequently rebuilt. The Turks destroyed the city in 1244, but the church somehow escaped and Bethlehem was rebuilt once again. The Population of Bethlehem today is made up of Christians and Moslems. Among the Christians: Catholics of Latin, Syrian, Malachite, Armenian and Maronite rites and Orthodox of Greek, Syrian and Armenian denominations. Protestants are present in the Judean town. As a result of the Six-Day War, Bethlehem came under Israeli rule. Church of Nativity Muslim and Crusader forces. The Grotto of the Nativity contains the manger that is believed to be the place where the baby Jesus was laid after he was born; the grotto is encased in white marble. The site of the birth is marked by a 14-point star on a marble stone. The High Altar standing above the Grotto. A picture of the cave of the church of nativity describing what the cave is about ...read more.