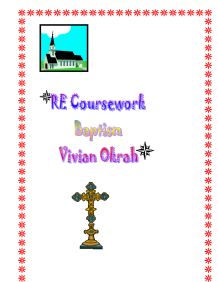 Infant Baptism Baptism is a ceremony that symbolizes the welcoming of a person into God's house. There are two different ways which baptism is practiced; these are known as infant baptism and believers baptism. I will explore how infant baptism takes place in a Roman Catholic Church and believer's baptism in a Baptist church. You will find out how the ceremonies take place, the people who are involved, and what their roles are. You will see why ceremonies differ, and why it is also important to get baptised as an infant or to have a confirmation. You will also realise the significance of baptism for Christians in the world today. As well as see a number of arguments in favour for infant baptism or arguments against it. In the Roman Catholic tradition, having membership of the church is done by a ceremony called Baptism. Infants are baptised because many Christians believe that at the Baptism the child is born again as a child of God, it marks a new beginning. Parents and Godparents are present at the ceremony to help guide the child through the journey of faith. There is a specific procedure all Roman Catholic churches follow. Firstly the family all present the child for baptism, they are welcomed at the church door by the priest. The priest, parents and Godparents then make the sign of the cross on the baby's forehead. ...read more.

The candidates are then asked if they have repented of their sins and if they have faith in the Lord Jesus Christ. If they wish each candidate may read a short passage from the Bible. They may also give a testimony. This is a brief account explaining how they came to be Christians and why they wish to be baptised. The candidate and minister then step into the pool. The minister says "(Name), because you have repented your sins and have requested baptism, I now baptize you in the name of the Father and of the Son and of the Holy Spirit". The believer must be completely immersed under water as a sign of drowning to sin and being born again sharing in Jesus resurrection. This practice is known by the term "Born Again Christian". Believers require that turning to Christ must be a positive decision and that some people baptised as infants need to be "reborn" to have Christ in their lives. Baptism has been an important part of Christianity since the earliest days of the church. It is originated from the Jewish religion. To many people in the world, being baptised means that you have been welcomed into Gods house. Baptism is an initiation ceremony that makes a person a member of something. So people who are baptised become members of the Christian community. A number of Christian traditions teach Baptism as a sacrament, an outward sign of the giving of God's grace and salvation to a person. ...read more.

Then later Christians wished their children to be baptised, so that they too could join the family of the Church. This was mainly because Christian's adults could not understand why they could become part of the Catholic Church and their children could not. Baptism marks a new beginning, so the parents of a child want their child to be cleansed of original sin which descends from Adam & Eve. This is supported by Mark 1:4 " Turn away from your sins and be baptised and God will forgive you of your sins". Nevertheless still, people do not understand the point in this because it is natural for human beings to sin. So when they are cleansed of original sin it does not do anything physically for them. According to Matthews Gospel 28:19 it says "Go, then, to all peoples everywhere and make them my disciples: baptise them all in the name if the father the son and the Holy Spirit" (also known as the trinity). Non-believers of infant baptism say that as the children grow up they perhaps will rebel against their parents or their religion because they were not given the choice of being baptised. In conclusion giving my opinion I think that infant baptism is not pointless after reading all the arguments because one of the main reasons of being baptised is to be cleansed of original sin and know wants their child to be raised as a sinner. I hope after reading this you would have decided what ceremony of baptism you believe is the right choice for you. ...read more.