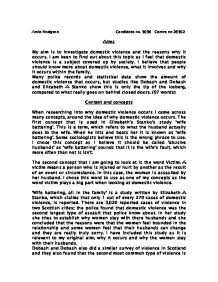 Investigate domestic violence and the reasons why it occurs

Amie Hodgson Candidate no. 3036 Centre no 26302 Aims My aim is to investigate domestic violence and the reasons why it occurs. I am keen to find out about this topic as I feel that domestic violence is a subject covered up by society. I believe that people should know more about domestic violence, what it involves and why it occurs within the family. Many police records and statistical data show the amount of domestic violence that occurs, but studies like Dobash and Dobash and Elizabeth A Stanko show this is only the tip of the iceberg, compared to what really goes on behind closed doors. (97 words) Context and concepts When researching into why domestic violence occurs I came across many concepts, around the idea of why domestic violence occurs. The first concept that is used in Elizabeth's Stanko's study 'wife battering'. This is a term, which refers to what the husband actually does to the wife. When he hits and beats her it is known as 'wife battering'. Some sociologists believe this is the wrong phrase to use. I chose this concept as I believe it should be called 'abusive husbands' as 'wife battering' sounds that it is the wife's fault, which more often than not is isn't. ...read more.

(400 words) Main research methods and reasons The research method that I will be using for my coursework is an unstructured interview. An unstructured interview would be the best method for me, as it would provide a more comfortable atmosphere for the interviewee to answer. This will help me to create a special bond with the interviewee. In order to carry this out I would have to find someone who would be willing to participate, as domestic violence is a very sensitive subject. Interpretivists use this method as they gain in-depth qualitative data. I will set up the interview more like an informal conversation than a stereotyped interview. I will have no predetermined questions but I will have general topics of discussion. I must be careful not to ask any leading questions, as this will effect my respondent's answers. The big advantage of an unstructured interview is that I will have the opportunity to get a rich insight and understanding of the topic that of domestic violence and this is the only method that will enable me to understand the reasons why it occurs. I feel that this method is better than a structured interview as I will be able to find out things from the respondent that would lead to further discussion. ...read more.

In order to get the most valid answers I would have to gain their trust and make them feel more comfortable. This can sway their thoughts and feelings. This could effect the respondents answers and affect the study overall. One ethical problem is that when analysing the data gained from the participant it all has to be strictly confidential which is very hard when dealing with criminal behaviour. It also may lead to major complications when producing and publicising the findings. One of the theoretical problems of this research is according to positivists it lacks reliability as it is such as small sample and I wouldn't be able to generalise my findings. The final potential problem is how I will record my data. If I went ahead and used a video recorder to record the interviews it may upset the respondents, as they may feel uncomfortable and uneasy during the interview. This could mean that the data that is given could not be as valid as I would need it to be in order to carry out my research. Another way that could record my findings is to write up what the respondent has said at the later date. This method could also not be valid as some of the vital information could be forgotten or misinterpreted. (305 words) Altogether 1,214 words. ...read more.