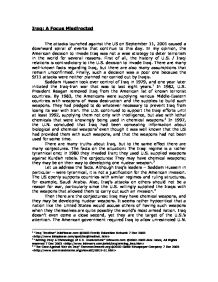 Iraq: A Focus Misdirected The attacks launched against the US on September 11, 2001 caused a downward spiral of events that continue to this day. In my opinion, the American decision to invade Iraq was not a wise strategy to deter terrorism in the world for several reasons. First of all, the history of U.S. / Iraqi relations is contradictory to the U.S. decision to invade Iraq. There are many well-known facts regarding Iraq, but there are also many assumptions that remain unconfirmed. Finally, such a decision was a poor one because the 9/11 attacks were neither planned nor carried out by Iraqis. Saddam Hussein took over control of Iraq in 1979, and one year later initiated the Iraq-Iran war that was to last eight years.1 In 1982, U.S. President Reagan removed Iraq from the American list of known terrorist countries. By 1983, the Americans were supplying various Middle-Eastern countries with weapons of mass destruction and the supplies to build such weapons. They had pledged to do whatever necessary to prevent Iraq from losing its war with Iran. ...read more.

willingly supplied the Iraqis with the weapons that allowed them to carry out such an invasion.3 Then there are the conjectures: Iraq may have chemical weapons, and they may be developing nuclear weapons. It seems rather hypocritical that a nation like the United States would accuse others of having such weapons when they themselves are quite possibly the world's most armed nation. Iraq doesn't even come a close second, yet they are the target of the U.S.'s attention. The American government required Iraq to allow unrestricted U.N. inspection. Through examination of past events, like those in Germany in the late 1940's4, it would be highly unlikely that the U.S. would willingly submit to the same requests they put upon Iraq. Finally, Iraq was in no way directly related to the terrorist attacks on the United States. The American government took advantage of the support of their people on the issue of terrorism. Because of their fear and insecurity, American citizens blindly supported the attack on Iraq even though it had nothing to do with terrorism. ...read more.