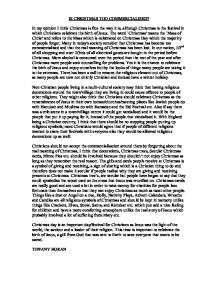 IS CHRISTMAS TOO COMMERCIALISED?

IS CHRISTMAS TOO COMMERCIALISED? In my opinion I think Christmas is fine the way it is, although Christmas is the festival in which Christians celebrate the birth of Jesus. The word `Christmas' means the `Mass of Christ' and refers to the Mass which is celebrated on Christmas Day which the majority of people forget. Many in today's society consider that Christmas has become too commercialised and that the real meaning of Christmas has been lost. In our nation, 1/3rd of all shopping and over 2/3rds of all electrical goods are bought in the period before Christmas. More alcohol is consumed over the period than the rest of the year and after Christmas more people seek counselling for problems. ...read more.

Also if say there was a crib scene in a town/village centre it could get vandalised and it would be the people that put it up paying for it, instead of the people that vandalised it. With England being a Christian country, I think that there should be no stopping people putting up religious symbols; most Christians would agree that if people of different religions wanted to share their festivals with everyone else they would be allowed religious decorations up as well. Christians should not accept the commercialisation around them by forgetting about the real meaning of Christmas, I think that decorations, Christmas trees, Secular Christmas cards, Mince Pies etc. should be involved because they shouldn't not enjoy Christmas as long as they remember the real reason. ...read more.

Christmas carols are really good and are used a lot in order to raise money for charities for people less fortunate than themselves so that they can enjoy Christmas as much as most other people. Things like a Star or Angel on a tree, Holly, Nativity Plays, Advent Calendars, Wreaths and Candles are all religious symbols of Christmas and should be kept in memory unlike things like Crackers, Elves, Snow, Santa, and Reindeer etc. which just add a nice feeling for children and have a more comforting atmosphere unlike the real story of Jesus which probably involved a lot of suffering from Mary etc. Christmas day is an important day/festival for Christians as Jesus was the light of the world, the saviour and a leader of their religion. This time is important to celebrate the birth of Jesus, a gift from God that was sent to Earth to save everyone that wants to be saved. TIFFANY HORAN ...read more.