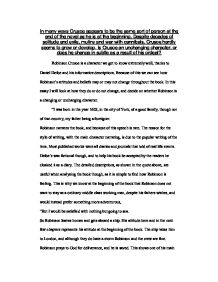 Is Crusoe an unchanging character, or does he change in subtle as a result of his ordeal?

In many ways Crusoe appears to be the same sort of person at the end of the novel as he is at the beginning. Despite decades of solitude and exile, mutiny and war with cannibals, Crusoe hardly seems to grow or develop. Is Crusoe an unchanging character, or does he change in subtle as a result of his ordeal? Robinson Crusoe is a character we get to know extremely well, thanks to Daniel Defoe and his informative descriptions. Because of this we can see how Robinson's attitudes and beliefs may or may not change throughout the book. In this essay I will look at how they do or do not change, and decide on whether Robinson is a changing or unchanging character. "I was born in the year 1623, in the city of York, of a good family, though not of that country, my father being a foreigner. Robinson narrates the book, and because of this speech is rare. The reason for the style of writing, with the main character narrating, is due to the popular writing of the time. Most published works were all diaries and journals that told of real life events. ...read more.

I must throw you into the sea too." It is experiences like these that show how little Robinson cared for his fellow man. Also, it reflects his attitudes later in the book where is obsessed with his power on the island. Slaves in the 17th century showed your wealth and power, and would have made Robinson feel important, something that was essential to him. Robinson eventually is picked up a Portuguese ship. The captain offers to buy Robinsons boat and Xury and take Robinson to Brazil. Robinson agrees, handing over Xury, again not showing any care, and is taken to Brazil where his skill of fitting in with any situation is shown. Within 3 years of arriving in Brazil Robinson has a successful tobacco planting business going. Robinson goes with a group of merchants and planters to look for slaves to work on his plantation. However, this proves bad for Robinson as he lands upon a desert island. The average person would find it extremely hard surviving on a desert island all alone. However, Robinson is not an average person. Robinson has a unique ability to adapt himself to any situation. ...read more.

Robinson does however progress, and when he meets his friend 'Friday' seems to be able to love a fellow human being, who before Robinson showed little or no respect for. When Robinson eventually returns to land he discovers that the Portuguese captain has been good to his word and looked after Robinsons plantation for him. Robinson is so pleased with his kindness that he gives him some money. Robinson is changed in subtle ways by the end of the book. You can see this in the way he treats people. He is now much more caring and compassionate. He looks out for others. He shows this by giving the captain money, and bringing gifts to the people on his island. He also believes in God more strongly. This is showed in many ways throughout the book, and is especially obvious when Robinson teaches Friday about God. There are also areas where Robinson doesn't change. One of the main of these is work ethic which he has from the beginning to the end of the book. To conclude I would say that Robinson's attitude changes subtly throughout the book. He becomes a kinder more caring person as a result of his time on the island. His attitude towards people and money also changes, but he keeps hold of his better attributes. Matt McDonald ...read more.