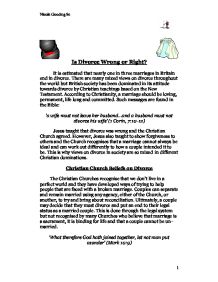 Is Divorce Wrong or Right?

Is Divorce Wrong or Right? It is estimated that nearly one in three marriages in Britain end in divorce. There are many mixed views on divorce throughout the world but British society has been dominated in its attitude towards divorce by Christian teachings based on the New Testament. According to Christianity, a marriage should be loving, permanent, life long and committed. Such messages are found in the Bible: 'a wife must not leave her husband...and a husband must not divorce his wife' (1 Corin, 7:10-12) Jesus taught that divorce was wrong and the Christian Church agreed. However, Jesus also taught to show forgiveness to others and the Church recognises that a marriage cannot always be ideal and can work out differently to how a couple intended it to be. This is why views on divorce in society are so mixed in different Christian dominations. Christian Church Beliefs on Divorce The Christian Churches recognise that we don't live in a perfect world and they have developed ways of trying to help people that are faced with a broken marriage. Couples can separate and remain married using any agency, either of the Church, or another, to try and bring about reconciliation. ...read more.

Divorce brings so much pain and misery to lives, and shame society, that it should be discouraged and made difficult to obtain. * A priest who is asked to marry a person who has already gone against the Christian teachings and failed in one marriage has no reason to believe that they will take their vows more seriously in the second marriage. There are also many arguments in favour of allowing people to remarry in Church: * Many first marriages are between fairly young couples. If with greater maturity, they find that their relationship has changed completely and that they are no longer compatible or in love, how can the Church not give these couples a second chance with marriage? * If people want a church wedding the second time around, it obviously seems important to them to remarry in a church or they would avoid all of the fuss. If it means this much to them to take their vows before God, the Church shouldn't stand in their way. * Jesus taught love and forgiveness and never told anyone not to give people a second chance - the Church should do the same. * If the Church of England can offer a blessing service for second marriages and say at the same time that being divorced and marrying again is wrong, how can they bless the marriage? ...read more.

The influence of the Church, which overall still sees divorce as a last resort, has diminished more and more over the last few decades and therefore has to open up more and more to modern ways of thinking if it wants to be seen as tolerant and modern. The Queen of Great Britain is head of the Church of England and three of her four children are divorced. This too encourages people to be divorced as they look up to the royal family. Nowadays, people see divorce as more acceptable than they would have done about thirty years ago. My Opinion on Divorce In my opinion there is no right or wrong answer to divorce. It is a very personal decision to make. I believe that at the moment, divorce tends to be taken too lightly by too many people. People who are religious are less likely to get a divorce than those who don't really have a connection with a religion because they don't feel bound by the religious values and ethics of marriage. I believe that more help should be made available to those experiencing difficulties because divorce can be a very devastating experience for those going through it and the support could help couples work through their problems. Divorce seems to be an easy way out of a marriage, it should only be a last resort. Nicole Gooding 9c 1 ...read more.