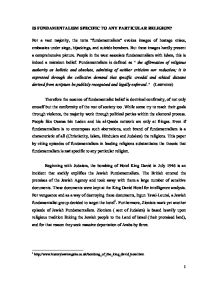 IS FUNDAMENTALISM SPECIFIC TO ANY PARTICULAR RELIGION

IS FUNDAMENTALISM SPECIFIC TO ANY PARTICULAR RELIGION? For a vast majority, the term "fundamentalism" evokes images of hostage crises, embassies under siege, hijackings, and suicide bombers. But these images hardly present a comprehensive picture. People in the west associate fundamentalism with Islam, this is indeed a mistaken belief. Fundamentalism is defined as " the affirmation of religious authority as holistic and absolute, admitting of neither criticism nor reduction; it is expressed through the collective demand that specific creedal and ethical dictates derived from scripture be publicly recognized and legally enforced ." (Lawrence) Therefore the essence of fundamentalist belief is doctrinal confirmity, of not only oneself but the conformity of the rest of society too .While some try to reach their goals through violence, the majority work through political parties within the electoral process. People like Osama bin Laden and his al-Qaeda network are only at fringes. Even if fundamentalism is to encompass such aberrations, such brand of fundamentalism is a characteristic of all (Christianity, Islam, Hinduism and Judaism) ...read more.

Though has model was logically coherent and later accepted to be valid, they were persecuted by the Catholic Church because their system was in conflict with the Bible. In addition, crusades epitomize Christian fundamentalism. Crusades were a series of military campaigns, sanctioned by the Catholic church that took place during the 11th through 13th centuries. Originally, they were Roman Catholic endeavors to capture the Holy Land from the Muslims, but some were directed against other Europeans, such as the Fourth Crusade against Constantinople, the Albigensian Crusade against the Cathars of southern France and the Northern Crusades. People were forced to convert to Christianity, if they refused, they were put to death3.Thus Crusades were in part an outlet for an intense religious piety which rose up in the late 11th century. Yet another example is the attempt, by some Christian fundamentalist groups to shut down, by force, abortion clinics. Some have even gone to the extent of threatening and intimidating employees, and even murdering the doctors working these clinics. ...read more.

Moreover, muslim fundamentalists in Iran, Sudan, some parts of Persian Gulf and lately Afghanistan, have amalgamated with the political forces to institute a particularly harsh set of rules as political law Called the Sharia or the Islamic law. In Light of the above mentioned examples it is extremely important to realize that that fundamentalism is not synonymous to terrorism or violence, but rather people who harbor fundamentalist beliefs are so committed to their dogma they can go to any extent (from mere activism to violence) to eradicate any exceptions to their dogma. It is all but natural to encounter such people in all the religions. What is interesting is the reason why people from all the religions harbor such tendencies? Probably because it offers an easy way out - a fundamentalist need not think deeply about a doctrine or be highly educated in it; as one Mormon leader once said, "Don't think for yourself. The thinking has already been done."6 1 http://www.historylearningsite.co.uk/bombing_of_the_king_david_hotel.htm 2 http://www.facingthechallenge.org/copernicus.htm 3 http://www.wikipedia.org/ 4 http://www.wikipedia.org/ 5 http://english.aljazeera.net/NR/exeres/19E6EA5A-8207-4F06-958F-8DD77A05DC27.htm 6 http://www.bidstrup.com/religion.htm ?? ?? ?? ?? 1 ...read more.