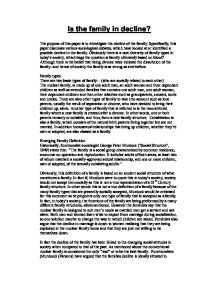 Is the family in decline?

Is the family in decline? The purpose of this paper is to investigate the decline of the family. Specifically, this paper discusses various sociological debates, which have looked at or identified a possible decline in the family. Obviously there is a vast diversity of family types in today's society, which begs the question is family ultimately based on blood? Although there is the belief that rising divorce rates indicate the dissolution of the family--and hence of society the family is as strong as ever before. Family types There are two basic types of family: - (who are socially related to each other) The nuclear family, is made up of one adult man, an adult woman and their dependant children as well as extended families that contains one adult man, one adult woman, their dependant children and then other relatives such as grandparents, cousins, aunts and uncles. There are also other types of family to take into account such as lone parents, usually the result of separation or divorce, who have decided to bring their children up, alone. Another type of family that is referred to is the reconstituted family where a new family is created after a divorce. In other words, one or both parents remarry or cohabite, and thus, form a new family structure. Cohabitation is also a family, which consists of the natural birth parents living together but are not married. ...read more.

When we first got together and had our daughter we did experience segregated conjugal roles as there was a clear division and separation between our roles, as being the woman of the house it was expected of me to run the home, work part time and also look after our child, while he worked and then came home to a clean house and tea on the table. This soon changed and we now both play a big part in the running and day-to-day responsibilities of the house and also share the care of our daughter. Many families tend to live in egalitarian roles as its convenient and no longer considered to be immoral which has a direct impact on the marriage statistics, showing that the family is statistically in decline. With so many couples choosing cohabitating lives it looks as though the family is in decline as figures show a natural decrease in marriage ceremonies but this is not correct. In fact, other family types, including the lone parent families are as much of a family as the conventional nuclear family and should not be used as evidence for the decline of the family. Further many lone parent seem families seem to aspire to the traditional ideology of the nuclear family. In fact many single parent households can still effectively fulfil the functions of the traditional nuclear. ...read more.

Family Law Act of 1996 increased the cooling off time to 18 months when it was previously 12 months to try and restrict the rising numbers of divorces. Obviously, the family is not on the decline, when all types of family types are included in the final analysis. The rise in divorce rate only affects the conventional nuclear family type, which is indeed on the decline, due the many changing societal trends. In fact the rise of divorce is a result of a number of factors including changes in public opinion and the greater ability of women to support them. However, as we have discussed above, out of divorce other family types often emerge. In other words, the family is not in decline. In fact, the exact opposite seems to be true. Many new emerging family types have emerged that are as strong and as stable as the nuclear family structures. Cohabitation and other forms of family structures are now taking over the previously ideology of a family pre industrialisation Therefore although areas of family life relating to marriage, separation and divorce suggest a decline in the nuclear family structure, cohabitation and single parenting, are also relevant social indicators of the relative state of family life in contemporary Britain. This has proved that the family is not in any way declining nor is it in crisis - it's simply not a necessity nor is it required to be married in order to be classed as a family. It seems to be more a matter of definition. ...read more.