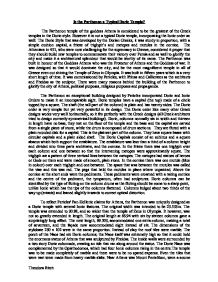 Is the Parthenon a Typical Doric Temple?

Is the Parthenon a Typical Doric Temple? The Parthenon temple of the goddess Athena is considered to be the greatest of the Greek temples in the Doric style. However it is not a typical Doric temple, incorporating the Ionic order as well. The Doric Style that was developed by the Dorian Greeks, it was sturdy in proportion, with a simple cushion capital, a frieze of triglyph's and metopes and mutules in the cornice. The Athenians in 451, who were now challenging for the supremacy in Greece, considered it proper that they should build new temples to commemorate their victory over Persia and as well to glorify the city and make it a architectural splendour that would be worthy of its name. The Parthenon was built in honour of the Goddess Athena who was the Protector of Athens and the Goddess of war. It was designed so that it would dominate the city, and be the most magnificent temple in all of Greece even out shining the Temple of Zeus in Olympia. It was built in fifteen years which is a very short length of time. It was commissioned by Pericles, with Iftinas and Callicrates as the architects and Pheidas as the sculptor. There were many reasons behind the building of the Parthenon to glorify the city of Athens, political purposes, religious purposes and propaganda. The Parthenon an exceptional building designed by Pericles incorporated Doric and Ionic Orders to make it an incomparable sight. Doric temples have a capital (the top) ...read more.

The four outside corner columns slant inward diagonally. The three levels of the crepidoma are slightly domed in the centre because to the eye purely horizontal lines would have appeared to dip in the middle The Parthenon was not only famous for its spectacular size and its use of marble. Externally it held more sculptures than any other temple. The Parthenon featured four types of sculpture: the statue of Athena housed in the naos, the Ionic frieze along the outside of the naos wall, the Doric metopes on the entablature above the colonnade along the outer sides of the whole structure, and the sculptures of the pediments under each end of the roof. The pediment was created when Greek temple makers created a sloped roof that went over the entablature this left a triangle that was bland and needed decorating. The pediment sculptures carried elaborate engraving on the east end of the birth of Athena and the west the contest between Athena and Poseidon for the patronage of Athens. On the external entablature, there were 92 metopes were decorated with Greeks fighting Trojans and Lapiths against Centaurs. To make the overall effect of the Parthenon even more impressive the entablature that was on the Doric porches were replaced from the ordinary metopes and triglyph's to a continuous Ionic Frieze. These Friezes were made to run along the top of the walls from one end to the other, so they were continuous sculptures. The Ionic frieze was about three hundred and twenty five feet long and three feet three inches in height. ...read more.

It was linked with all the other temples that were in the temenos so that Parthenon would be seen as the focus for the biggest and grandest festival that the ancient world ever saw. The Parthenon is designed on the basis of a Doric temple, except it has Ionic alterations which make the Parthenon the exceptional building that it is. The ideas that are behind the Parthenon are the making of a typical temple though, the Parthenon was designed to impress and glorify the city of Athens. The Parthenon which differs from the typical Doric temple in the way that it is 8 x 17 in columns, rather than 6 x 13, the fact that the frieze is continuous and made in the Ionic order with sculptures of everyday citizens rather than Gods and Heroes, making again the Parthenon that much more extravagant. The idea for the Parthenon was to impress therefore it would never make an impact on if it was the standard Doric temple. It had to be moderated to make it that much more striking. Pericles wanted to prove to the Spartans (who they had just defeated) that they were now the dominate city in Greece. The Parthenon was to represent these political reasons. It. Incorporating the most pleasing affects which would create the agreeable overall shape. So the Parthenon could never have been a typical Doric temple. Therefore, making it the most impressive temple that the Ancient world has ever seen, although it was never to be made in the typical Doric Style, it simply was far too politically important. It was a 'reflection through deliberate perfection'. Theodora Birch ...read more.