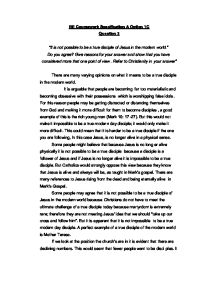 &quot;It is not possible to be a true disciple of Jesus in the modern world.&quot;

RE Coursework Specification A Option 1C

“It is not possible to be a true disciple of Jesus in the modern world.”

Do you agree? Give reasons for your answer and show that you have considered more that one point of view. Refer to Christianity in your answer”

There are many varying opinions on what it means to be a true disciple in the modern world.

It is arguable that people are becoming far too materialistic and becoming obsessive with their possessions which is worshipping false idols. For this reason people may be getting distracted or distancing themselves from God and making it more difficult for them to become disciples, a good example of this is the rich young man (Mark 10: 17-27). But this would not make it impossible to be a true modern day disciple; it would only make it more difficult. This could mean that it is harder to be a true disciple if the one you are following, In this case Jesus, is no longer alive in a physical sense.

Some people might believe that because Jesus is no longer alive physically it is not possible to be a true disciple because a disciple is a follower of Jesus and if Jesus is no longer alive it is impossible to be a true disciple. But Catholics would strongly oppose this view because they know that Jesus is alive and always will be, as taught in Mark’s gospel. There are many references to Jesus rising from the dead and being eternally alive in Mark’s Gospel.

If we look at the position the church’s are in it is evident that there are declining numbers. This would seem that fewer people want to be disciples. It also indicates that that it is harder for people to stand up for what they believe especially if their Christians.

Another reason why it is harder to be a true disciple is because of the practical difficulties for example, shops are now open on Sundays which is supposed to be a day of rest for all Catholics. Peer pressure may also be causing difficulty for people to be true disciples and follow Jesus’ message effectively.

Some of the demands of discipleship, like giving away all of your money, are not possible because in some societies if you have no money you die.

From Mark we learn that true discipleship is not to be perfect. Peter, James, John and Judas all made mistakes in Mark’s gospel; this tells us that in the modern world you don’t have to be perfect to be a true disciple.

One of the key qualities of being a true disciple is selflessness. We see lots of examples of this both at time of Jesus and today.

Overall, I think that Jesus is still present today through the church and the Bible and through other people so therefore we can still follow Him and become true disciples. Although it may be more difficult today it is never impossible to be a follower of Jesus.